Visit to Kuang Si Waterfall near Luang Prabang
Kuang Si (Xi) Waterfall is the biggest in the Luang Prabang area with three tiers leading to a 50-metre drop into spectacular azure pools before flowing downstream. The pools also make great swimming holes and are very popular with both tourists and locals. You can change clothes for swimming at the wooden huts located close to the entrance.
Visit to  Royal Palace Museum in Luang Prabang  Laos  Click here

The pools also have cascades of up to five metres high with deliciously cold water due to the shade given by the surrounding lush tropical jungle, if you don’t fancy a swim then you can relax in the shade and watch others having fun jumping in and out of the water. 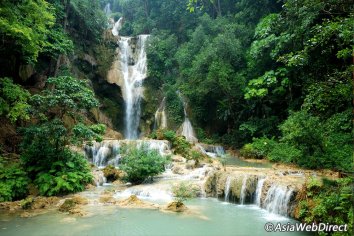 There are trails allowing you to climb up to the top where you can see the stream feeding into the falls and enjoy some more natural pools. Remember to bring the correct footwear as the trails can get slippery and are certainly not recommended for children or the frail.
Visit to  Royal Palace Museum in Luang Prabang  Laos => Click here 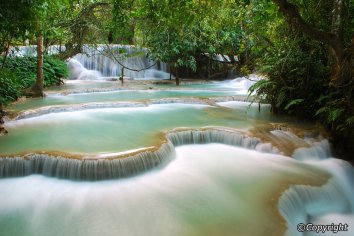 Breathtaking cascades of water make the Kuang Si one of Luang Prabang’s most popular tourist attractions. The journey to the waterfall is worth taking time over with vistas across rice fields and the opportunity to meet locals along the way. A Hmong village is a great place to stop where the older female villagers still dress in traditional costume, you can also purchase their hand woven crafts to take home as a souvenir. If you want to take photos at the village you will be expected to buy from them in return. 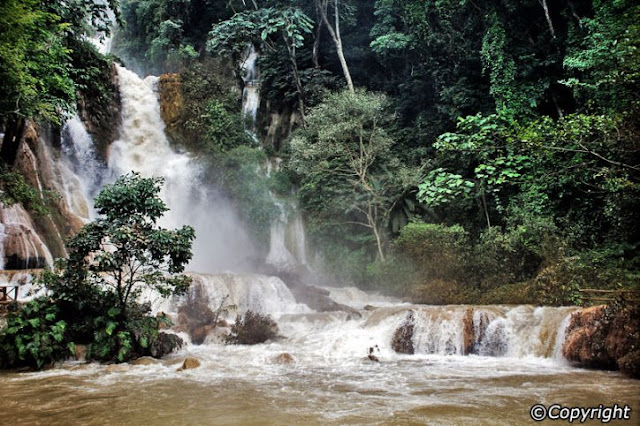 When you arrive at Kuang Si you’ll discover cages enclosing two Asian black bears following rescue from poachers. The weather at the waterfalls is noticeably cooler making it a really good place to escape the heat; children will especially enjoy a day out here playing in the falls. You can make a day of it at the waterfalls by bringing a picnic with you or buying some food and drinks from one of the local stalls. There are tables and shelters located at the front of the lower level pools.

Good to Know The Kuang Si Waterfall is located 29km south of Luang Prabang. You can make your own way to the waterfall by hiring a motorcycle which means you can take in some scenic villages en-route. 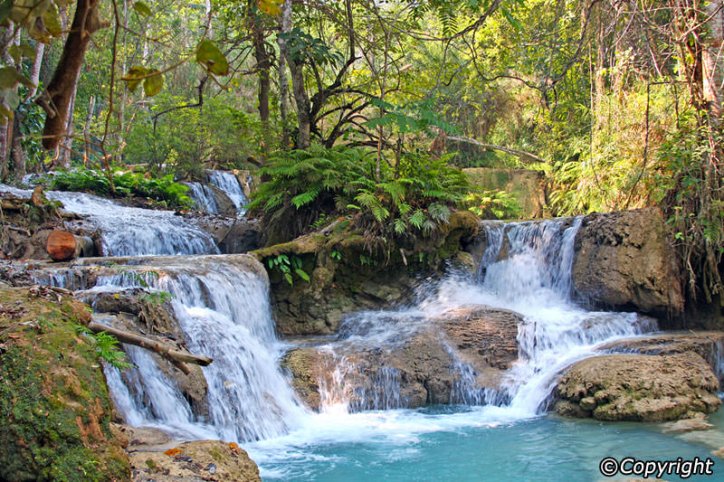 The roads however are rocky and can be hard going so an easier option is to book a tour which usually costs around $5US per person; you can also hire your own tuk-tuk for a half-day rental or jump on one of the mini-buses departing daily from the Naluang Mini Bus station. An unusual alternative is to hire a boat and ride down the Mekong River before catching another boat for a short hop across to the falls. You will also need to pay an additional admission fee to one of the locals at the falls usually $2.00US per person. This goes towards keeping the bridges and walkways in good working order.

How to get to Kuang Si Waterfall, Luang Prabang 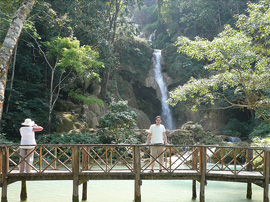 Kuang Si or Kouang Si Waterfall is one of the highlights – if not THE highlight – of Luang Prabang. A single large cascade tumbles from the jungle feeding a series of falls and pools that make perfect swimming holes. Laos may be a landlocked nation without beaches but Kuang Si’s cool turquoise waters make up for it. Don’t dismiss it as “just another waterfall.” I’ve never met a visitor disappointed by it.

It’s 23 km from town and takes approximately 45 minutes by tuk-tuk. Here are all the ways you can get to Kuang Si.

How to get to Kuang Si Waterfall in Luang Prabang

A roundtrip tuk-tuk ride should cost around 180,000 – 200,000 kip  or $22-25 USD (the driver will wait for you at the falls to bring you back to town). Pay the driver when you return to town. Before you gripe that it sounds like a lot for a tuk-tuk, remember that petrol in Laos is relatively expensive, the driver has to pay one of those special government fees for the privilege to take you there and this trip is likely his fare for the day.
Pro: The most straightforward and easiest ways to go. You can go and return whenever you want to.
Con: Though the road to Kuang Si is nicely paved, you do feel ever bump in a tuk-tuk. Also not so comfortable for tall people.
The tuk-tuk driver will try to round up as many people to join and split the cost, which will start at 200,000 kip. It will cost you around 50,000 kip per person and the driver will leave when the tuk-tuk has 4-5 people. You’ll see touts who organize this at the big intersection in front of the post office, fruit shake and baguette stands.
Pro: This can be one of the cheapest ways to get to Kuang Si.
Con: You can wait a very long time for the touts/drivers to find people to join and he is the one who ultimately decides when you leave town. You also have to agree as a group on a set departure time from the falls.

Travel agents can sell you a spot on a public minivan shuttle. The quality of minivan varies but if you’re lucky it will be air-conditioned. There are set departure and return times. At the time of writing this, cost is 60,000 kip and departure times are 11:30 am and 1:30 pm.
Pro: The cheapest way to get to Kuang Si.
Con: The minivan picks up passengers at everyone’s individual hotels and this process can be slow. Return times are also set. You only get a few hours at the falls.
This is the method I recommend as this combines two must-do experiences in Luang Prabang – the waterfalls and a boat ride on the Mekong. The Banana Boat BB01 trip will take you one hour downriver through gorgeous mountain scenery. You can’t get all the way to Kuang Si via the Mekong so you’ll stop as close to it as possible, then catch a fun ride in a pickup truck for a few kilometers. Best of all, you’ll come back on the Mekong in the beautiful late afternoon light, the best time of day to see life on the river.
Pro: Combining two key experiences in Laos, it’s fantastic to get out onto the river, scenery.
Con: If you spent two days on a slow boat to Luang Prabang, a boat trip probably won’t be so exciting for you.
It’s a fun way to get to Kuang Si. The road is paved, you can drink in the fresh air and the scenery is rather pretty. Renting a motorbike in Luang Prabang will cost around US$20/day + petrol. But if you’ve never driven a motorbike before, on holiday in Luang Prabang is not the place to learn. People often ask me, “Is it safe to ride a motorbike Luang Prabang? The traffic doesn’t seem so bad.”
Traffic isn’t the main issue, nor is it the speed. The issue is poor driving skills. Throw your assumptions of “rules of the road” out the window. The amount of vehicles (especially large trucks) have ballooned over the past two years and people are unaccustomed to sharing the road. Don’t be surprised if you see 12-year old kids street racing or suicidal dogs darting out onto the road. Tourist motorbike accidents are common along the road to Kuang Si – I witnessed a nasty wipeout on one of the bridges. And remember, a proper hospital is a 1.5 hour flight away.
Pro: Independence, get to see the scenery.
Con: If you get into an accident, you’ll discover just how poor medical facilities are in Laos.
23 km one way and it’s hilly. You’ll want a good bike with gears and if it’s a hot time of year, set out very early. Beware it will be dusty and smoky during hot-dry season (February-April). One option is to cycle one way and catch a tuk-tuk back or vice-versa. The journey to the falls is the uphill battle. It’s fairly straightforward to navigate your way there. Get a Hobo Area Map for peace of mind.
Pro: Slow down to see villages and the views
Con: Don’t count on being able to hitch a ride if you want to quit mid-way
Hiring a private vehicle will mean an air-conditioned minivan and a driver. It costs 250,000 kip (US$30) flat-rate so this method is very economical for a group.
Pro: The most comfortable way to go. Inexpensive for a group. The flexibility to leave Kuang Si when you want to.
Con: Expensive for 1 or 2 people.
Get there instantly. The most convenient way for wizards and witches since flying on broomsticks is illegal in Laos.
Pro: The fastest way to get to Kuang Si.
Con: As always, you must have a License to Apparate from the Department of Magical Transportation and there is always risk of splinching.