New Zealand judge Peter Mahon (1923-86) conducted an inquiry into the crash of a DC10 aircraft near Mount Erebus, Antarctica on 28th November 1979.  Referring to Air New Zealand he said that he had been presented with "an orchestrated litany of lies."  Mahon's statement was itself the subject of litigation - The Honourable Peter Mahon v Air New Zealand 1983 -  where the Judicial Committee of the Privy Council held that Mahon had not given Air New Zealand a proper opportunity to answer that criticism.

The determinations of the Hillsborough Inquest jury leave no doubt that a litany of lies developed even as the disaster unfolded and this was perpetuated by the Police and elements in the media.  Even at the Inquest held in Warrington there were attempts by the Police to counter the conclusions of the Independent Panel report.  Those attempts were out of kilter with the apology issued in 2012 by South Yorkshire Police (previous post).  It also appears that the South Yorkshire Police were engaged in an earlier litany of lies involving the events at the British Steel Orgreave Coke Plant in 1984 and its aftermath.

Orgreave and calls for an Inquiry:

The year long Miner's Strike of 1984-85  involved hardship and violence as pit communities from South Wales to Scotland fought to retain their local collieries - for many the only local source of employment.  What is sometimes called the Battle of Orgreave took place on 18th June 1984. It involved large numbers on both sides; a well-equipped and trained Police presence and the deployment of mounted officers against the assembled miners.

In December 2015 it was reported that the Home Secretary was considering  a legal submission from campaigners calling for an inquiry into alleged malpractice by South Yorkshire police, relating to events at and after Orgreave - The Guardian 15th December 2015.


The South Yorkshire Police referral to the IPCC:

In November 2012, South Yorkshire police referred themselves to the Independent Police Complaints Commission (IPCC) over allegations that police officers had assaulted miners at Orgreave, then committed perjury and misconduct in a public office, and perverted the course of justice in the subsequent prosecutions of 95 miners on riot charges, which collapsed in court.

The Independent Police Complaints Commission (IPCC) published a redacted report in June 2015 - see IPCC Orgreave Coking Plant referrals - and the Commission is now considering the release of an unredacted version - IPCC Announcement 4th May - " ..... we are now considering whether the legal issues that prompted the report being redacted still remain. One key consideration is that the IPCC and Operation Resolve are conducting criminal investigations into the events at Hillsborough and its aftermath. As a result we must now carefully consider whether we can publish an unredacted version of the report at this stage without compromising the integrity of  the ongoing criminal investigations."


Some of the background:

Confrontation between government and the National Union of Mineworkers had resulted in strikes in 1972 and 1974.  In the late 1970s and early 1980s, governmental plans were developed for use in the event of any further miner's strikes - see, for example, the 1978 Ridley Report.

At the 1979 General Election a Conservative government came into power under the leadership of Margaret Thatcher. A possible strike in 1981 was settled .  It is widely thought that the government was not then ready for a full conflict with the miners.  The Falklands campaign in 1982 undoubtedly restored the public popularity of Margaret Thatcher and the Conservative Party won the 1983 election (overall majority 144).  In March 1983, the government announced the appointment of Mr Ian Macgregor as Chairman of the National Coal Board  Macgregor had an uncompromising style which, as Chairman of British Steel (1980-83), had reduced the workforce by around 100,000.

The catalyst for the 1984-5 strike was the announcement by the National Coal Board (NCB) on 6th March 1984 that it intended to cut national capacity by 4 million tonnes and close 20 pits with the loss of 20,000 jobs. Cortonwood Colliery in South Yorkshire was to close imminently.  On 12th March 1984, Arthur Scargill, president of the National Union of Mineworkers (NUM), called a national strike against the pit closures. There was no strike ballot even though the Nottinghamshire and Midlands Coalfields for example, had called for a national ballot.

The strike was notable for many confrontations between pickets and the Police.  The Police response to the picketing involved large numbers of officers being deployed on an almost daily basis.  The Police presence at any particular location usually comprised officers from different Police Forces brought together for the day.   Plans to deal with mass picketing had been developed by the government in conjunction with senior Police Officers.  Police had been trained; special equipment assembled; and national police coordination put in place.

On 18th June 1984, the miners decided to picket the Coke Plant at Orgreave (near Rotherham, Yorkshire).  What has become known as "The Battle of Orgreave" ensued.  The National Union of Mineworkers (NUM) deployed 5,000 pickets from across the UK, who planned to use sheer numbers ("mass picketing") to prevent access to the works by strike-breaking lorries that collected coke for use at the British Steel mill in Scunthorpe.  At a confrontation in 1972 - Saltley Gate  - 3000 pickets had overwhelmed 800 police officers.  Against that background, the Police deployed some 6,000 officers at Orgreave.  They were equipped with riot gear and supported by police dogs and 42 mounted police officers.  The Police action succeeded in allowing the delivery from the Coke works to take place.

After the Orgreave confrontation, 95 miners were charged with the common law offence of RIOT.  In the event, not one conviction followed.  This BBC Inside Out documentary 29th October 2012  shows footage of the day at Orgreave and essentially makes the case that prosecutions for Riot were based on manipulation of Police statements many of which contained identical paragraphs.  The unsatisfactory nature of the evidence was revealed in court.

An interesting article by Mark George QC about Orgreave and its aftermath is at Justice Gap - Like Hillsborough: Orgreave cries out for justice.  George argues that - " ... the real reason why this matter cannot be left covered up any longer and why the government must now accept that the case for an independent and thorough inquiry into the events at Orgreave and the subsequent prosecutions has been fully made out. It is precisely because there was no investigation or inquiry back in 1985 that police literally got away with it. Their tactic of fixing the news agenda and blaming ‘the enemy’ had gone unchallenged. That was just how South Yorkshire Police dealt with such matters. But because no one challenged those tactics, when five years later the Hillsborough disaster happened and the finger of blame was once more being pointed in the direction of the police, the police used the same tactics again."

David Jones, the acting Chief Constable of South Yorkshire (The Guardian 6th May ) has said - "I would ... welcome an appropriate independent assessment of Orgreave, accepting that the way in which this is delivered is a matter for the home secretary.”

Publication of the FULL unredacted IPCC report will go a considerable way to establishing factual detail about the way in which the South Yorkshire Police operated and whether perversion of the course of justice occurred.  Nevertheless, the case for a fuller inquiry is very strong.  As noted by Doughty Street Chambers 4th May 2016 Calls for a Public Inquiry into Orgreave Intensify: -

"Police officers from forces around the country were involved in what were said to be serious assaults on picketing miners, and the wrongful arrests of 95 of them.  The miners were charged with a range of public order offences including riot, which at the time carried a life sentence.  The trials of the miners then collapsed.  There was never any public scrutiny of how and why that happened, nor was any police officer disciplined or prosecuted for their role with respect to Orgreave.

There are clear potential parallels between Orgreave and Hillsborough.  Both have at their heart South Yorkshire Police.  Both involve concerns about the police manipulating evidence, and colluding with the press to present a false narrative of events and to unfairly vilify different groups (the miners at Orgreave, the fans at Hillsborough)." 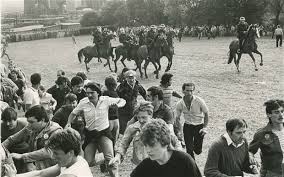