I always get asked when the best time to go to Hawaii is. When is the weather the best? Is there a rainy season? When can I get the best deals? These are smart questions to ask. Let me answer them as best I can.


Hawaii Weather
The official rainy season is in the winter from November to March. My personal experinece has been that the rainy season means absolutely nothing.
It rains every day somewhere on every island regardless of the time of year, and it is more like a sprinkle than a downpour. That is why it is so lush and beautiful there.
It is very rare for it to rain continuously for days.
The weather is best described by the micro systems within each island. Certain parts of every island get more rain than the other parts. This is due to the prevalent tradewinds that blow from east to west.
The leeward, or western and southern, sides of all the islands are usually warmer and more dry. The windward, or northern and eastern, sides are usually cooler and more wet.
A perfect example of this is the Big Island of Hawaii. Kona, on the leeward side, gets only 5-6 inches of rain a year. Hilo, on the windward side, gets more than 180 inches of rain a year, making it the wettest city in the United States.
In fact, on any of the islands, it is quite normal to be on a sunny beach on the south or west shore, and be able to see rain and a rainbow toward the mountains.
Let me put it to you this way...If you were a "weather person" here, you could say it would be "mostly sunny with a few mauka (mountain) showers" and you would be right 70% of the time.
If you watch the local news here, you will notice that the weather segment comes on for a few minutes at the end of the newscast. It's justthat predictable the majority of the time. I still find it amusing to watch the news in Minnesota where the weather comes on every ten minutes...and it's still wrong!
The point I am trying to make is this...as far as the weather goes, anytime is the best time. The odds are that you will have great weather.
Sidebar--Hurricane season is officially fromJune to November. The last hurricane to hit Hawaii was Iniki, back in September of 1992, when it damaged Kauai. 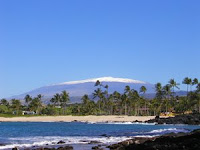 "High" season is considered from mid-December to mid-April. This is when flights and accommodations are usually more expensive. The summer months are also very busy because kids are out of school. The best time to get deals is April, May, September, October, and sometimes November.

There are also some special events that you should be aware of.