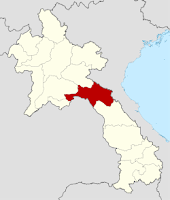 Bolikhamxay Province, located just south of Vientiane in central Laos, is a center for ecotourism activities with its two national protected areas and extensive system of wetlands. The journey from Ban Khoun Kham to Lak Sao on Route 8 offers spectacular scenery of karst mountain landscapes and is considered to be one of the most impressive passages in the country.

Wat Phabath, located on the road between Vientiane and Pakxan is an important pilgrimage site and sacred temple that houses a shrine containing a giant footprint of the Lord Buddha (phabath). It is believed that all travelers passing by the temple should stop and pay their respects to the spirits for a safe journey and strong health. 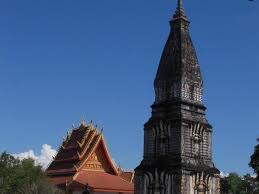 Phou Khao Khouay National Protected Area (NPA) covers an area of 2.000 km2 in Bolikhamxay and Vientiane Province has excellent evergreen, mixed decidous and coniferous forests in addition to extensive fire-clima grasslands which support key species that include wild elephants, white-cheeked gibbons and green peafowl. A commuity managed elephant watching tower in Ban Na provides one of the best opportunities to view large wildlife in Laos. One can take nature walks with village guides through the park’s old growth forests and well-known waterfalls-Tad Leu, Tad Xay and Tad Xang. Self-guided walks are also available from the visitor center at Tad Leuk which has camping facilities and tents for rent. Nam Kading NPA is abundant with wildlife dueits low population density and biologically diverse forest ecology. Elephant, gaur, giant muntjac, gibbon, the sooty babbler, rufous-throated fulvetta, river lapwing, wreathed and great hombills and large otters are just some of the many species that inhabit the area. One of the country’s most extensive wetland systems is located southwest of Pakxan town and is known to have a very unique and abundant population of migratory birds. The wetlands can be reached by motorbike or truck via a number of dirt trails leaving town. Also of interest is the natural cool springs along the Nam Mang River, a pleasant site for swimming and picnicking.
The province’s legendary festival, Bang Fai Phayanak (Naga Rockets) is held at the picturesque Phonsanh Temple overlooking the Mekong River on the 15th day of the 11th month of the Buddhist lunar calendar, coinciding with the last day of Buddhist lent, usually in mid-October. On this special night small multi-colored fire balls place to view this mysterious natural light show is at Ban Hai near the mouth of the Nam Ngum River.

Drive from Vientiane and a few in the Phou Khao Khouay National Protected Area. You’ll seek to peek at pachyderms, examine a pair of temples known for their mysteries, trek along a moonscape river-bed to boat ride, cruise up the Nam Kading to impassable rapids, and hike to a 100 meter tall waterfall.

Looking for wild elephants roaming free? An 80 km drive from Vientiane on Route 13 lands at Ban Na Village and its Wild Elephant Observation Tower and homestay. A short trek delivers you to the forest tower, which overlooks a saltlick and stream that attracts wild elephants in the evening. Though there is no guarantee you’ll see one, but over the years, visitors have reported spotting herds of up to 40 pachyderms including an old tusker, though groups of five to 15 are more common. You can also sign up for a trek to the Nam Hi River, Tad Luang Waterfall, or more distant 40 meter high Tad Fa.

Wat Phabath and Wat Phonsane overlap Route 13 near Ban Na, and present two of Bolikhamxay’s most remarkable attractions. In 1993, locals discovered a 2.4 x 1.2 meter Buddha footprint, and built Wat Phabath around it. Over the decades, journeyers make merit by placing gold-leaf on the phabath (Buddha footprint), and every year  in mid-January, the temple holds a festival to pay respect to the phabath. Wat Phonsane sits on sprawling green Mekong Riverside grounds, and is believed to be a sacred place where Buddha once took his meals. The temple is also known for the annual Bang Fai Phayanak Festival during October’s full moon, when the Mekong launches mysterious colored fireballs. 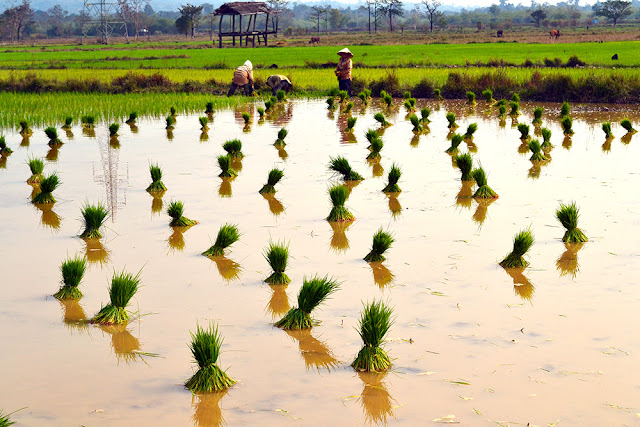 Be among the first to explore the trail along the Yong River’s rapids and overnight at the ethnic Meui village of Ban Yang Kheua at Km 99 on Route 13 South, where the New Zealand CBT-SED project is building a lodge. From here a tractor ride delivers you to the Yong River and its endless rapids racing over a stone-slab bed. A trek follows the river, and sometimes crosses it, allowing you to inspect the perfectly round craters, and infinite small channels gushing between the rocks. The walk ends at a wide set of short falls, where you can swim in a clear pool. From here, a boat connecting to Ban Yang Kheua. 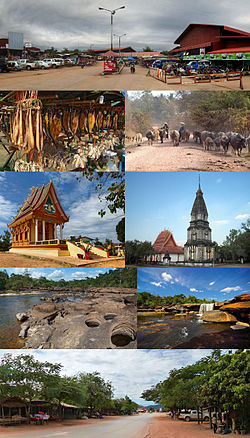 Take a river cruise few have experienced. About 40 km south of Paksan, you’ll cross the Nam Kading Bridge and start tasting the upcoming adventure, as longboats putter along he lazy river and vanish into the mountains. A few km along, long-tails at a makeshift port sit ready to take you up the Nam Kading. The once-calm water begins rumbling as the river rushes through a rocky canyon, until the Tad Vang Fong Falls completely block the way. You can anchor at the Nam Kading Protection Center and trek to more rapids by foot. The center also offers a lodge and camping equipment for a stay one the grounds.

As Route 8 cuts through the “Karst Corridor” a large elephant-shaped out-crop, Pha Xang, appear about 15 km from the Route 13 junction. Welcome to Ban Napong, and ethnic Toum village launching Tad Thone Waterfall treks and offering homestays. The 7 km morning trek to Tad Thone kicks off with a walk through rice fields to an old-growth forest. The trail traverses streams, before the going gets rigorous, with bursts of steep in clines and precarious ravine crossings. But after about 3 hours, Tad Thone appears, shooting over two ledges before a final plunge approaching 100 meters. You can then descend to the fall’s base, and avalanche of massive boulders big enough to host a picnic.