Brexit ~ where are we now?

The EU Referendum found the government distinctly unprepared for the outcome - Brexit.  Considerable uncertainty exists over key areas including the constitutional arrangements within the UK.  All of this has produced a massive amount of comment and several parliamentary committees are deeply immersed in the intricacies of Brexit.  This post ranges over some of the uncertainties and provides links to some of the available material.

Since 23rd June, the United Kingdom has seen the resignation of David Cameron as Prime Minister and the formation of a new government with Theresa May at its helm.  A new and very vital ministerial post in the new government is that of Secretary of State for Exiting the European Union and Mrs May appointed David Davis MP to the role.

Following the summer recess, the House of Commons debated Exiting the EU - House of Commons debate on Exiting the EU 5th September 2016 - but it appears that what the government wishes to see as the post-Brexit UK-EU relationship has yet to be worked out and, hopefully, presented to and agreed by Parliament before any triggering of Article 50 via which the withdrawal arrangement will be negotiated.  Nevertheless, the debate contained some indications including:

The government continues to maintain that it is for them to decide when to trigger Article 50.  They argue that the royal prerogative powers relating to treaties enable them to lawfully do this and that the prior consent of Parliament is not required.  Unsurprisingly, others argue that Parliament must have its say before the Article 50 trigger is pulled.  These opposing arguments will be heard in the High Court in October and it is highly likely that the matter will then proceed to the Supreme Court of the UK.  In a recent post on Public Law for Everyone, Mark Elliott (Professor of Public Law, Cambridge) notes that "as a matter of law, the arguments around whether legislation is needed or whether the prerogative can be used are finely balanced, but that the better view is that legislation is not required."  For further on this, see Law and Lawyers 27th June and the Case for a Parliamentary Vote (Jolyon Maugham QC). 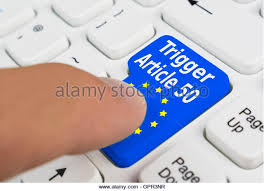 Before Article 50 is invoked, it may seem sensible that preliminary talks between UK government and EU take place but this does not appear to be the position adopted so far.  For example, such talks could be about matters such as the way in which negotiations would be handled.  See The Guardian 8th September where it is reported that the European commission president, Jean-Claude Juncker, is facing a legal challenge from British expatriates who claim that his ban on EU officials negotiating with the UK over Brexit is illegal.

Yet another area where some doubt has been raised is whether, having invoked Article 50, the UK could then unilaterally bring the process to an end.   On 4th May 2016, the House of Lords EU Committee issued a valuable report on The Process of withdrawal from the EU.  This concluded that there is nothing in Article 50 formally to prevent a Member State from reversing its decision to withdraw after Article 50 negotiations have commenced but the political consequences of such a change of mind would be substantial.  Whether that view is legally correct could probably only be decided by the Court of Justice of the EU.  It may be important to have a definitive answer since circumstances might arise making a change of mind necessary.  If the answer is that there cannot be a revocation by the UK then the involvement of Parliament in triggering Article 50 in the first place becomes even more imperative.

The UK as a UNION of Four:

The very future of the United Kingdom as a UNION of four is now unsettled and, given the fact that Scottish voters wished to remain in the EU, there are moves in Scottish politics for a further independence referendum.  The House of Commons Scottish Affairs Committee - Scotland's place in Europe - was an interesting session.  The Chairman asked witnesses what did Brexit mean.  Dr Jo Murkens of the London School of Economics Law Department replied that it meant a "massive constitutional headache for the United Kingdom."  The session may be viewed here.

Considerable uncertainty also exists regarding the relationship between Republic of Ireland and the United Kingdom.  The House of Lords European Union Select Committee took evidence on parliamentary scrutiny of the forthcoming Brexit negotiations and the impact of Brexit on UK-Irish relations.

An interesting contribution to the debate is by Aidan O' Neill QC on the Verfassungsblog on Matters Constitutional - INIS free? Towards a Scots-Irish Union.

The amount of material available about the referendum and Brexit is, to say the least, massive.  The various committees in Parliament are playing their part as can be seen via the links below.  Each House has its own committees and there seems to be a need to somehow bring all the parliamentary Brexit output together and, if possible, to make it available to the public via a single Brexit website.


Parliament libraries - Brexit: the next steps for the UK's withdrawal from the EU

Lords EU Committee - The process of withdrawing from the EU

Kings College London - The UK in a changing Europe