The Olympics for French gymnast Samir Ait Said ended in brutal fashion Saturday when he suffered a broken left leg while vaulting during the men's team qualifications.
It was the kind of injury that made spectators hurriedly look away and caused teammates to bury their heads.
French gymnastics officials tweeted that he fractured his tibia and fibula and would have surgery as soon as possible.
They said he thanked fans for their support and would be back to win gold at the Tokyo Olympics in 2020. 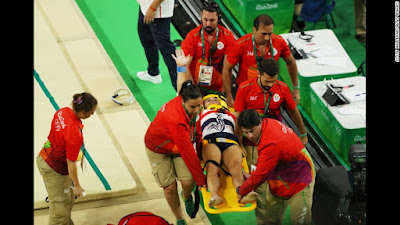 Samir Ait Said of France fractured two bones in his lower left leg during the men's gymnastics competition.
Said landed awkwardly after doing two backward flips off the vault.
According to USA Today, the leg breaking made a sharp crack that could be heard throughout the venue.
As Said grabbed around his knee and looked up at his lower left leg, he saw it flop unnaturally to the side. The 26-year-old covered his face with his right hand and was silent, perhaps too in shock to scream.