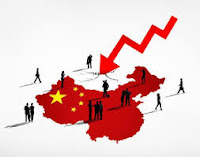 The good news is that the capital raises have begun. The bad news is that they need to continue.
An analysis of 765 banks in China by UBS Group AG shows that efforts to clean up the country's debt-ridden financial system are well underway, with as much as 1.8 trillion yuan ($271 billion) of impaired loans shed between 2013 and 2015, and 620 billion yuan of capital raised in the same period. But the work is far from over, as to reach a more sustainable debt ratio the Chinese banking sector will still require up to 2 trillion yuan of additional capital as well as the disposal of 4.5 trillion yuan worth of bad loans, according to the Swiss bank's estimates.

"Contrary to market perception, bank recapitalisation and bailouts have begun," said UBS's Jason Bedford. "Most interestingly, for the first time in a decade we note formal implementations of asset restructuring plans and recapitalisations and bailouts of individual — and large — institutions."
QuickTake China's Debt Bomb
The research shows a wide variations in progress, with some regions raising capital and writing off bad loans at a far faster pace than others, plus an unexpected schism between publicly listed and private lenders. Regional banks in hard-hit economic areas including Inner Mongolia, Heilongjiang, Shanxi, and Liaoning appear to have made little progress relative to their southern and coastal peers.
Meanwhile, unlisted lenders have raised more than 220 billion yuan in the two-year period — far more than the 38 billion yuan UBS estimates was raised by public banks — and despite only accounting for 20 percent of total banking sector assets.
"The write-offs undertaken by banks to date are certainly material but deeply inconsistent across the banking sector — and far from enough, in our view," Bedford said. "This is concerning and we believe that for every lender who has implemented an asset resolution plan, many others have not."
The quality of the capital raised remains of some concern with many listed banks opting to sell preferred shares while their stock trades below book value. Moreover, the degree to which Chinese banks are raising capital to plug balance sheet holes or fund additional credit growth remains an open question.
Bedford points out, for instance, that some lenders that have seen the sharpest capital increases — 103 percent and 305 percent — have also posted year-on-year asset growth of 118 percent and 122 percent. Such a dynamic could accelerate as China attempts tojump-start its economy with further credit expansion.
"The concern is that if we continue to see credit growth — loan plus shadow loan — at a two to three times multiple of GDP growth, then we believe the positive steps being undertaken to recap[italize] and deal with bad assets could be outpaced by the growth of non-performing loans," he concludes.
6:59:00 PM
Unknown
Banks, China, news, UBS
Email ThisBlogThis!Share to TwitterShare to Facebook