Bali is approximately 8 degrees south of the equator. So you can expect a tropical, warm and humid climate all year around with two main distinctive seasons: Dry Season and Rainy Season.

Bali's central mountains (volcanoes) include several peaks over 3,000 metres in elevation. Up here the temperatures are considerably cooler, and there is much more rainfall than in the coastal areas.

Best time to visit Bali depends mainly on the weather and on high and low season, which does affect the overall price for accommodation. High season is during the months of July and August, during Easter Holidays, and Christmas / New Year(December till 1st week of January).
However best time to come to Bali is April, May, June and September, just before and just after high season. It's still dry season, it's slightly less humid, and room prices can be 30-50% cheaper than during high season. Many shops offer sales and promotions, restaurants are less crowded in those mid-season months, and in general Bali is a bit more relaxed. October is not too bad either, still much less rain than November (usually, check the rainfall chart). 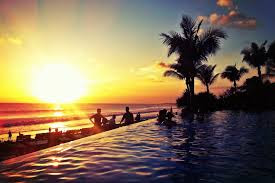 It's also the best time for water sport activities  such as scuba diving, surfing, snorkeling, etc. Waters are clear, crowd not too bad etc. Also major activities and attractions such as the family parks and fun things to do (Bali Zoo, Bali Bird Park, Marine & Safari Park, Waterbom, White Water Rafting, Monkey Forest, etc) have less visitors which can make the experience far more enjoyable.  And not to forget, in general the traffic and hustle  bustle on the roads is more bearable. Especially in Kuta, Legian and sometimes even Seminyak the narrow streets are packed during certain times in the day with cars and motorcycles. Some tourists love it that way and could not imagine a holiday otherwise, but if you like it more quiet, then Kuta and Legian during high season might not be the best choice.

Have a look at the climate table, which should give you a good idea about temperatures during the day and the expected rainfall during dry season and rainy season. Check our map to see if your holiday area is located at the coast, or in highlands near the volcanos etc

Seasons and Temperatures on Bali

Dry season is between April and September. Bali receives the most visitors during July and August. Temperatures are pretty steady all year round. During Bali's dry season beaches are generally clean and Bali shows its pretty side. One can still expect occasional rainfall though and sometimes even the locals are surprised how dry a week during rainy season can be and the other way around. Have a look at the chart below and check out temperatures, no. of days with rainfal etc in Denpasar, which is in the south where the main tourist areas are.

During rainy season which is typically from October to March Bali becomes more quiet. The sea is rougher, the beaches and the sea in the south (Kuta, Legian, Seminyak) can be quite dirty due to debris washed onto the shore during January and February. It's not happening always, but it can happen and depends on wind contitions and currents.
During rainy season winds are stronger at the coast, the water currents pick up and it can rain in buckets. Although, usually the rain stops after a few hours and the sun shines again. A lot of the times it rains during the night and days are o.k. Very rarely you have a few days when it rains continuously. In 2014 it didn't rain in Bali till December! And November was as dry as any July or August. Like in all parts of the world, weather becomes more unpredictable.

Central Bali and the Mountains

Bali's central mountain area is typically cooler and also more rainy than the lower coastal areas. Especially at night temperatures can drop significantly in the highlands near the volcanoes. Gunung Agung is for example 3031m high! Also the region around Ubud is a slightly cooler and expects more rain than the southern areas of Bali (Kuta, Legian, Seminyak, Denpasar, Sanur, Bukit Pennsula, Pecatu), which makes it rather pleasant.

Bali's is located very near to the equator, therefore its warm, tropical climate makes it a huge draw for tourists. Average year-round temperature stands at around 26-27°C with a humidity level of about 85-90%. Water temperatures are always pleasant. The two seasons are not clear cut and fully predictable. Christmas and New Year is clearly high / peak season on Bali and tourists come from all over the world to enjoy the beaches, the surfing, diving, the restaurants, the club, the spas and everything else Bali has to offer - although it is technically "rainy season". One can do everything during wet season but maybe climb the volcanoes and trekking in the highlands.