I stumbled across a very interesting article the other day, via Wired. It elaborated upon a study on the spotted salamander (Ambystoma maculatum) and its relationship with algae. I hope you’ve got a good grip on your chair, because you’re liable to fall out of your seat otherwise. It’s pretty sweet news.
Science: Algal Symbiosis &amp; More Solar-Powered Sea Slugs
algae, mutualism, photosynthesis, salamander, sea slug, symbiosis, science,

I stumbled across a very interesting article the other day, via Wired. It elaborated upon a study on the spotted salamander (Ambystoma maculatum) and its relationship with algae. I hope you’ve got a good grip on your chair, because you’re liable to fall out of your seat otherwise. It’s pretty sweet news.

Algae is quite useful. It’s food for smaller organisms, and photosynthesizes, providing the rest of us with oxygen, which is a good thing. In the case of the spotted salamander, it’s an even more intimate relationship. The salamander lives with algae within its cells, which is the truly exciting news. Symbiosis between salamanders and algae isn’t anything new: it was even known in this salamander before the new study. But the crux of the matter is the degree of the symbiosis. Since the algae are within the salamander’s cells, that is a darn close relationship. In fact, such an intense relationship was previously thought to only occur between algae and invertebrates. This is the first time that it’s been shown between algae and a vertebrate, proving that creatures with backbones still have some tricks up their sleeves.

So how do the algae associate with the salamanders, and when?

The algae occur within the embryos of the salamanders, so the symbiosis starts early, literally in the womb. The scientists involved with the study think that algae get inside of the cells of the embryos via two routes: being passed down from the mother salamander (akin to a starter set of algae) and by obtaining the algae from the environment. So essentially, the salamanders have a small amount of algae to start them off, and then are able to obtain more from the vernal pools in which the egg masses are laid. An algal bloom is triggered inside the embryos (they’re not sure why this happens), and BOOM! Now the salamanders have a whole bunch of oxygen-producing algae. And that’s exactly why the algae are so important to the developing salamanders: oxygen. You know how some people say all you need is love? Well, oxygen’s important too.

If you’re a developing salamander embryo, just hanging out in your egg mass, you have a lot of support—about 100 other salamander brothers and sisters. To put this into perspective, here’s a picture of the egg mass: 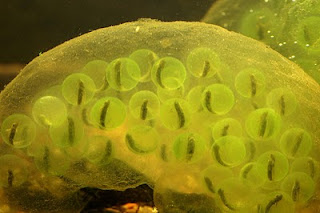 Kind of cute, isn’t it? Sort of similar to a frog egg mass. So now that we know what the egg mass looks like, we can imagine the problem with it. When you have so many small salamander embryos packed in there, and you have the luck of being the embryo in the middle of the whole mass, you’re going to be starved for oxygen that’s being used up at the edges. But wait, there’s still hope! You have algae from your awesome mother salamander that are photosynthesizing, giving you free oxygen. All you have to give them is your nitrogenous wastes, which you didn’t want in the first place anyway. That’s the beauty of this symbiosis: both algae and salamander benefit, and on top of that, it’s recycling!

Thanks to the oxygen produced by the algae, the embryos are more likely to survive: developing in a healthy manner, and they’re bigger than salamanders that weren’t provided with oxygen from the algae. The embryo stage is when the algae seems to help the most, though the algal cells stick with the salamanders throughout the rest of their lives.

As befitting any other scientific study that’s in the least bit interesting, this one raises a lot more questions. Other salamanders have associations with algae, so where do they fall on the symbiotic spectrum? Are the associations as intimate as this one, where the algae are within the cells, or do the algae play a smaller role? Is more than one species of algae involved, and are different species better partners? And what about other amphibians? If salamanders have these relationships, what about other amphibians: frogs? Caecilians? It’s all very exciting.

Since we’re on the topic of algae symbiosis, this post is going to shift gears a bit and focus on sea slugs and nudibranchs. Besides, I have some cool pictures from Costa Rica I want to include here. Let’s get to it!

As I mentioned earlier, such an intimate algal symbiosis was known in the invertebrates already. In particular, some striking examples come from the Gastropods, especially sea slugs.

The sea slug Elysia chlorotica, found along the east coast of the United States, not only uses stolen chloroplasts from algae, but stolen genes as well. First, the sea slug seeks out some delicious algae. It has the chloroplasts that the slug needs, and to get them, the slug sucks them out of the algae—like it’s using a straw. This is called kleptoplasty, and this sea slug is able to take it even further. The slug has genes from the algae incorporated into its own genome. Again, it has genes from an alga in its own genome. This calls for a quotation.

“This could be a fusion of a plant and an animal — that’s just cool,” said invertebrate zoologist John Zardus of The Citadel in Charleston, S.C. - Wired.com

What does this fusion mean for the slug? Well, it’s now an autotroph, essentially. The genes allow the slug to produce a photosynthetic pigment, chlorophyll a, meaning that it’s able to photosynthesize: it’s solar-powered. Without the pigment, the slug wouldn’t be able to utilize photosynthesis, since the pigment is what allows it to use sunlight as part of the photosynthetic process. It absorbs a certin spectrum of light, and is actually just one of a variety of pigments. There are others, such as carotenoids, chlorophyll b, and xanthophylls, which all absorb a different spectrum of light.

Pigments other than chlorophyll a are called accessory pigments, because they absorb other wavelengths that chlorphyll a can’t use. Accessory pigments allow plants to take advantage of the entire spectrum of visible light.

So since the sea slug now has functional chloroplasts, and is producing chlorophyll a for said chloroplasts, it can produce its own food, and doesn’t have to feed anymore. All it needs is some sunlight, and it’s set for life.

A similar sea slug that I’ve had a personal encounter with is Elysia diomedia, which is in the same genus as the previously mentioned sea slug, but is found in the Pacific Ocean, off the coast of Central America. This little guy is quite pretty: it has a brilliant green body, white and black stripes along its sides and head, and an orange and black folded parapodial edge (or if you prefer, lettuce). 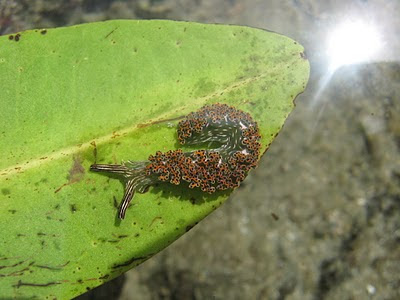 They’re found in warm tide pools that get a lot of sun. Since it’s a species that is kleptoplastic, that’s a no-brainer. 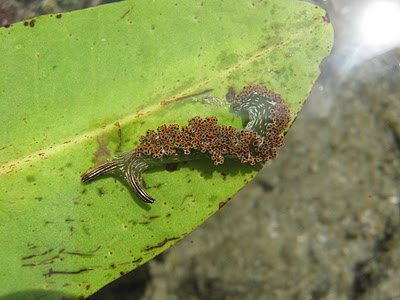 It’s not the fastest creature you’ll come across, it’s content to move around with no hurry. It can stretch its body out pretty far, as I found out after watching it move through its tide pool. It’s sort of like a slinky in that respect. 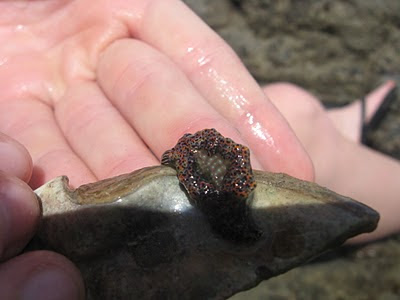 In this picture, you can see some bright blue specks in the middle of its lettuce ruffles: that’s where it keeps the chloroplasts: way cool.

If you’ve only thought of algae as disgusting pond scum that you have to deal with when walking through a wetland, you’re mistaken. And you obviously are not a sea slug or salamander, having that attitude.
3:29:00 AM
Unknown
algae, mutualism, photosynthesis, salamander, science, sea slug, symbiosis
Email ThisBlogThis!Share to TwitterShare to Facebook