Another Attempt to Show the RUC Behind the Curtain

In 2007, readers of the Annals of Internal Medicine could read part of the solution to a great medical mystery.(1)  For years, health care costs in the US had been levitating faster than inflation, without producing any noticeable positive effect on patients.  Many possible reasons were proposed, but as the problem continued to worsen, none were proven.

Prices are High Because They are Fixed That Way

The article in the Annals, however, proposed one conceptually simple answer.

The prices of most physicians' services, at least most of those that involved procedures or operations for Medicare patients, were high because the US government set them that way. Although the notion that prices were high because they were fixed to be so high was simple, how the fixing was done, and how the fixing affected the rest of the health system was complex, mind numbingly complex.

Perhaps because of the complexity of its implementation, the simplicity of the concept has not seemingly reached the consciousness of most American health care professionals or policy makers, despite the publication of several scholarly articles on the subject,.efforts by humble bloggers such as yours truly, a major journalistic expose, and recent congressional hearings.  The lack of discussion of this issue seemed to be a prime example of what we have called the anechoic effect, that important causes of health care dysfunction whose discussion would discomfit those who are currently personally profiting from the current system rarely produce many public echoes.  (For a review of what is known to date about how the offputtingly named Resource Based Relative Value Scale Update Committee (RUC) works, and previous attempts to makes it central role in fixing what US physicians are paid public, see the Appendix.)

The Washington Monthly Pulls Back the Curtain

Now another attempt to pull back the curtain that hides the RUC was just made by the Washington Monthly.  A long, detailed, well-written article by Haley Sweetland Edwards went through the major points, and included some new discoveries.  She asserted:

The RUC is Well Hidden

[The RUC is] probably one of the most powerful committees in America that you’ve never heard of.

when a roomful of professionals from the same trade meet behind closed doors to agree on how much their services should be worth. It’s called price-fixing.

The Government Enables the RUC to Fix Prices

this kind of 'price-fixing' is not only perfectly legal, it’s sanctioned by the U.S. government. At the end of each of these meetings, RUC members vote anonymously on a list of 'recommended values,' which are then sent to the Centers for Medicare and Medicaid Services (CMS), the federal agency that runs those programs. For the last twenty-two years, the CMS has accepted about 90 percent of the RUC’s recommended values—essentially transferring the committee’s decisions directly into law.

The Government Fixed Prices are Endorsed by the Private Sector

private insurance companies also use Medicare’s fee schedule as a baseline for negotiating prices with hospitals and other providers.

The Price Fixing Drives Up Costs and the Use of Services

So if the RUC inflates the base price Medicare pays for a specific procedure, that inflationary effect ripples up through the health care industry as a whole.

These manipulated prices are also a major reason why specialists are in oversupply in many parts of the country, while a worsening shortage of primary care providers threatens the whole health care delivery system. 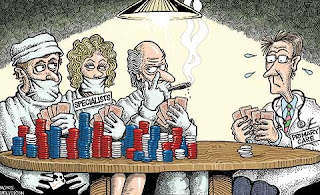 [Art by Monte Wolverton for the Washington Monthly article]

What to Do and What Will Happen?

Economists have beaten us over the head with idea that incentives matter.  The RUC seems to embody a corporatist approach to fixing prices for medical services to create perverse incentives for physicians to do more procedures, and do less conversing with and examining patients, examining the best clinical research evidence about their problems, and rigorously thinking about how best to help them.  More procedures at higher prices helps physicians who do procedures.  It may help even more the corporations that provide the devices and drugs whose use is necessitated by such procedures, and the hospitals who can charge a lot of money as sites for performance of procedures.  It may even help insurance companies by driving ever more money through the health care system, and thus allow rationalization for higher administrative expenses as a function of overall money flow.

Yet incentives favoring procedures over all else may lead to worse outcomes for patients, and more costs to patients and society.  If we do not figure out how to make incentives given to physicians more rational and fair, expect health care costs to continue to rise, while access and quality continue to suffer.

take the process away from the control of the AMA and put it in the hands of a well-resourced group of experts under the auspices of the federal government. This might take the form of a panel of doctors employed by the government, or of an advisory committee of representatives of different medical societies but with greater representation of primary care doctors.

get Medicare out of the business of funding fee-for-service medicine.

I can only hope that the latest Washington Monthly article, which was accompanied by an editorial and a short first-hand account of how difficult is the lot of the modern primary care physician, will succeed in increasing awareness of the RUC and its essential role in making the US health care system increasingly unworkable.  Of course, such awareness may disturb the many people who are making so much money within the current system.  But if we do nothing about the RUC, and about the ever expanding bubble of health care costs, that bubble will surely burst, and the results for patients' and the public's health will be devastating.

APPENDIX - Background on the RUC

We have frequently posted, first here in 2007, and more recently here,  here, here, and here, about the little-known group that controls how the US Medicare system pays physicians, the RBRVS Update Committee, or RUC.

Since 1991, Medicare has set physicians' payments using the Resource Based Relative Value System (RBRVS), ostensibly based on a rational formula to tie physicians' pay to the time and effort they expend, and the resources they consume on particular patient care activities. Although the RBRVS was meant to level the payment playing field for cognitive services, including primary care vs procedures, over time it has had the opposite effect, as explained by Bodenheimer et al in a 1997 article in the Annals of Internal Medicine.(1) A system that pays a lot for procedures, but much less for diagnosing illnesses, forecasting prognoses, deciding on treatment, and understanding patients' values and preferences when procedures and devices are not involved, is likely to be very expensive, but not necessarily very good for patients.

As we wrote before, to update the system, the Center for Medicare and Medicaid Services (CMS) relies almost exclusively on the advice of the RBRVS Update Committee. The RUC is a private committee of the AMA, touted as an "expert panel" that takes advantage of the organization's First Amendment rights to petition the government. Membership on the RUC is allotted to represent specialty societies, so that the vast majority of the members represent specialties that do procedures and focus on expensive, high-technology tests and treatments.

However, the identities of RUC members were opaque for a long time, and the proceedings of the group are secret.  As Goodson(2) noted, RUC "meetings are closed to outside observers except by invitation of the chair." Furthermore, he stated, "proceedings are proprietary and therefore not publicly available for review."

In fact, the fog surrounding the operations of the RUC seems to have affected many who write about it. We have posted (here, here, here, and here) about how previous publications about problems with incentives provided to physicians seemed to have avoided even mentioning the RUC. Up until 2010, after the US recent attempt at health care reform, the RUC seemed to remain the great unmentionable. Even the leading US medical journal seemed reluctant to even print its name.

That changed in October, 2010.  A combined effort by the Wall Street Journal, the Center for Public Integrity, and Kaiser Health News yielded two major articles about the RUC, here in the WSJ (also with two more spin-off articles), and here from the Center for Public Integrity (also reprinted by Kaiser Health News.) The articles covered the main points about the RUC: its de facto control over how physicians are paid, its "secretive" nature (quoting the WSJ article), how it appears to favor procedures over cognitive physician services, etc.

In 2011, after the "Replace the RUC" movement generated some more interest about this secretive group, and its complicated but obscure role in the health care system, the current RUC membership was finally revealed.  It was relatively easy for me to determine that many of the members had conflicts of interest (beyond their specialty or sub-specialty identity and their role in medical societies that might have institutional conflicts of interest, and leaders with conflicts of interest).

Then that year a lawsuit was filed by a number of primary care physicians that contended that the RUC was functioning illegally as a de facto US government advisory panel.  It appeared that things might change.  However, it was not to be.  A judge dismissed the lawsuit in 2012, based on his contention that the law that set up the RBRVS system prevented any challenges through the legal system to the mechanism used to set payment rates.  The ruling did not address the legality of the relationship between the RUC and the federal government.  The eery quiet then resumed, only punctuated briefly in early 2013, when a Senate committee held hearings with no obvious effect.