Set in a spacious, well-tended garden just off one of Luang Prabang’s main boulevards (Thanon Sisavangvong), you will find the fascinating Royal Palace Museum, which is also known as Haw Kham. The museum is well worth a couple of hours of your time if you want to learn more about Lao history and culture.

Although the current main building dates from the early 20th century, the exhibits stretches back several centuries to trace the turbulent past of the Lane Xang kingdom and the colonial era, through to the present day. Originally the residence of the king, the museum was designed in the French Beaux-Arts style, with many tasteful accents of traditional Lao culture. 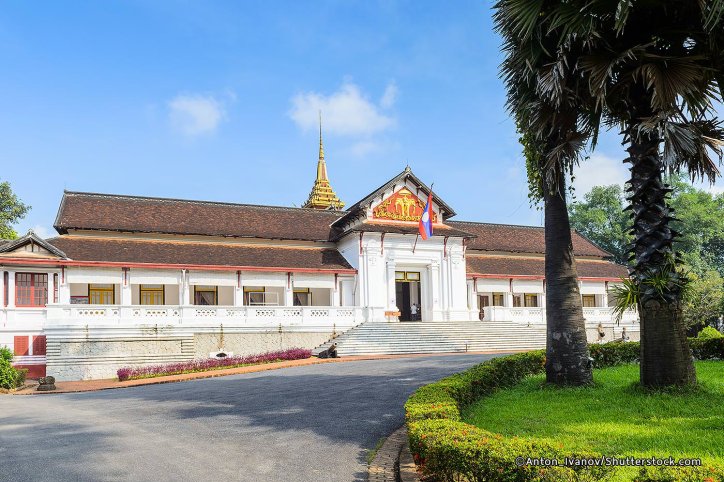 Although the current main building dates from the early 20th century, the exhibits stretches back several centuries to trace the turbulent past of the Lane Xang kingdom and the colonial era, through to the present day. Originally the residence of the king, the museum was designed in the French Beaux-Arts style, with many tasteful accents of traditional Lao culture.


Visit to  Royal Palace Museum in Luang Prabang  Laos => Click here
When the communists came to power in 1975, they took over the palace and sent the royal family to re-education camps. The palace was converted into a museum that was opened to the public in 1995 after careful renovation, and remains in good condition. The grounds contain a number of other buildings including a new exhibition hall and a chapel (Haw Prabang), and a statue of King Sisavangvong. You can take excellent photos of the museum compound from the Mount Phousi steps that descend to Thanon Sisavangvong. 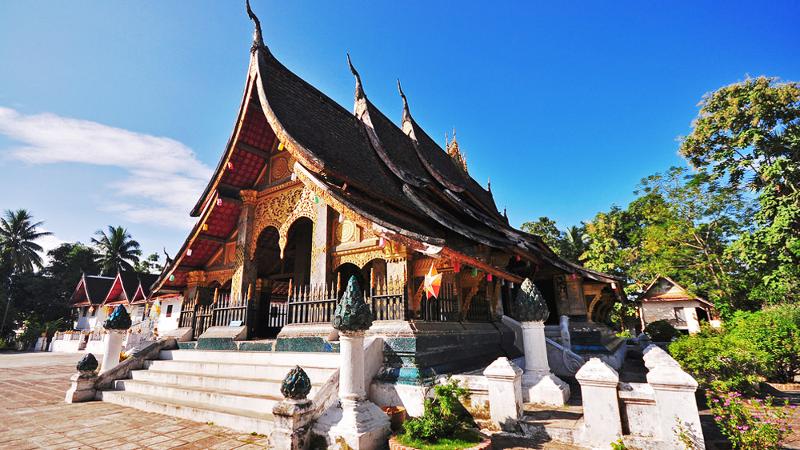 • The museum used to be a Royal Palace, which was built in 1904 for King Sisavangvong after the previous palace was destroyed by invaders in 1887.
• The royal apartments have been faithfully preserved, and offer a fascinating glimpse into the lifestyle of the king and his family.
• The exhibits include royal religious objects, weapons, statues, screens and paintings from centuries past.
• In the mirrored Throne Hall, you can see the crown jewels of Laos.
• Make sure you visit the room that features murals depicting everyday Lao life in the 1930s.
• A new pavilion houses the 2,000 year-old, 83-centimetre Prabang Buddha, which is made from solid gold.
• The garage contains the last king’s collection of cars.
• A reasonable fee is charged to visit the Royal Palace Museum.
• After paying your entrance fee you will have to leave your shoes, bags and any photographic equipment in the lockers (free of charge) before entering the exhibit halls.
• The best time to visit if you want to beat the crowds is early in the morning.
• Drama or dance performances are usually held several evenings a week at the National Theatre next door.
The Royal Palace Museum Opening Hours: The museum is open from 08:00 to 11:30 and 13:30 to 16:00 every day except Tuesday.

Location: The Royal Palace Museum is situated on Thanon Sisavangvong in the city centre, just opposite the steps leading up to Mount Phousi. It is set back from the street in a park that also houses the National Theatre and several other buildings.

How to get there: It is easy to walk to the museum from anywhere in downtown Luang Prabang, or you can go by rented bicycle or motorcycle or in a taxi or tuk-tuk.

The National Museum in Luang Prabang

The Royal Palace Museum in Laung Prabang (also known as “Haw Kham”) was once Laos' Royal Palace. It houses a lot of interesting historical items. Every item tells a story...so you will learn quite a lot about Lao history and about Laos' royal.

Built in 1904, it features a blend of Lao traditional and French style. It was built for King Sisavang Vong and his family during the French colonial era.

After the death of King Sisavang Vong, the crown Prince Savang Vatthana and his family were the last to occupy the palace. After the revolution in 1975, the building was taken over by the government. The palace was then converted into a national museum and opened to the public in 1995.

Located in the city just the other side of the road from Phou-Si mountain, the palace is in walking distance of all main hotels and guest houses.

In the palace compound, there are several buildings including the Royal Barge Shelter, a conference hall, and Haw Pha Bang (a ornate pavilion) that houses the standing Buddha statue called Prabang. In the pass the Prabang statue and many other religious artifacts were housed in the palace, the front wing.

Also in the compound is a building that houses the royal car collection. It's a small collection, mostly American cars from the 1950s to 1970s. Behind the garages is another building which has a gallery for rotating exhibitions.

The palace building can be visualised in three main parts: The front wing, consisting of reception areas; the throne hall (in the middle); and the back wing that was once residential area. 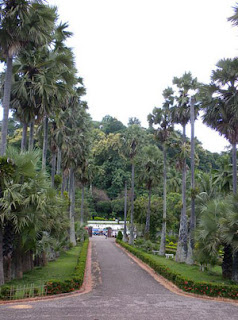 The King’s reception hall at the right of the entrance now displays busts and paintings of the Lao monarchy along with two large gilded and lacquered Ramayana screens.

The walls of the room are decorated with murals depicting scenes of traditional Lao lifestyles, painted by a French artist back in the 1930s.

The room next to the right of the King’s reception hall displays a collection of the palace’s most prized art including a cast of the prized Pha Bang buddha statue in gold, silver and bronze.

On the left of the entrance hall the former secretary’s reception area now houses gifts from various heads of state to the Lao monarchy. Displayed objects are grouped by “socialist” and “capitalist” countries.

The room to the left of the secretary’s reception was once the Queen’s reception room. It now displays paintings of King Savang Vatthana, Queen Khamphoui and the crown Prince Vong Savang. Also displayed are friendship flags from China and Vietnam, and replicas of sculpture from the National Museum in New Delhi.

The throne hall connects the reception wing with the residential wing where the royal family’s bedrooms and living quarter were. The walls of this room are decorated with cut mirrored tile mosaics similar to those seen in the town’s oldest temple, Wat Xieng Thong. Displayed in the throne hall are the throne of the king and queen, the king’s elephant chair and glass cases containing many crystal Buddha images that were removed from Wat That Makmo.

The Back Wing (residential area)

The back wing was the royals’ residential area and includes bedrooms, a dining room, a library and a music and dance exhibits area displaying Lao classical instruments and masks.
The residential area has been preserved more or less as it was in 1975 before the royal family departed.

Admission to the museum

Admission fee is 10,000 Kip (about US$1.25).
No photography is allowed inside the museum.
No bags allowed, so you must leave yours in lockers provided near the entrance
Shoes must be removed before entering the museum.
Dress conservatively. Women with short shorts or skirts are required to put on a Lao skirt before entering (Lao skirts are available for hire on spot).
Opening hours: Monday – Saturday, 8.30am-11am.
3:55:00 AM
Thượng Võ
Laos, travel, wold travel
Email ThisBlogThis!Share to TwitterShare to Facebook