At psychologytoday.com, Zhana Vrangalova Ph.D wrote about how acceptance of polyamory can be increased.


Does the increased presence of alternative relationships in the public arena lead people to become more accepting of such lifestyles? And does it make them want to explore these lifestyles for themselves? A new study—a first of its kind—suggests that the answer to at least one of these questions is yes.


There are people who idealize monogamy because they think they have to. When they discover there are other ethical ways, they may be more supportive of those other ways.


As you can see from the left side of the graph below, participants who read the more elaborate definition of polyamory or were asked to critically examine monogamy later reported more positive attitudes toward polyamory than those who were provided with a simple, short definition. The change wasn’t drastic, about half a point on a 7-point scale, but the experimental manipulation itself wasn’t particularly dramatic either – just a couple of minutes of reading or thinking about this issue. Imagine what the effect could be if people were presented with detailed information or similar cognitive exercises on a more regular basis. 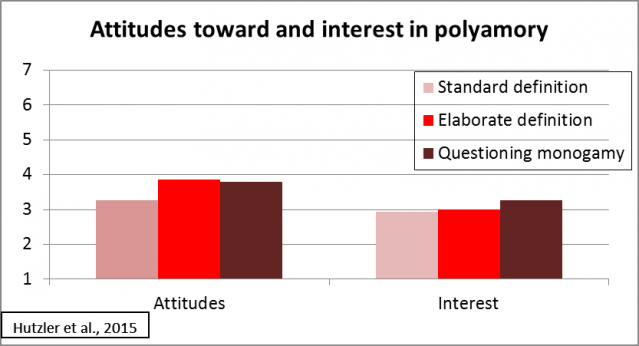 
This suggests that perceptions of alternative romantic relationships follow similar patterns to those of any other stigmatized group: The more people know about it, the more accepting they become of the people who belong to it. Known as the ‘contact hypothesis,’ this principle has been found to apply to many other social groups, such as sexual or racial minorities.

If people realize that polyamorous people are people they meet every day, they'll be less likely to believe bigoted statements about polyamory.


Personal interest in trying out polyamory, on the other hand, wasn't affected by either providing more info about polyamory or asking people to consider the pros and cons of monogamy (right side of the graph above). After all, personal interest in doing something requires more than just positive attitudes toward that thing: biological predisposition, conducive upbringing, social acceptability, willingness of partner, practical feasibility...

Right. Someone can accept that polyamorous people should have their rights, without being polyamorous themselves.

If you're polyamorous, has being out changed the attitude of other in your life? Or if you're not polyamorous, have your opinions changed by learning more about it?
1:25:00 PM
Unknown
help, polyamory, science, stigma
Email ThisBlogThis!Share to TwitterShare to Facebook