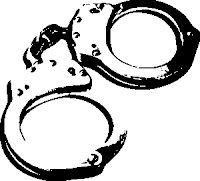 The people of the US state of Nebraska should be highly offended by the despicable actions of a few people in law enforcement. The incalculably valuable The Final Manifesto first alerted us on Tumblr about this case. While the news reports are headlined with an arrest over "incest," and it is absurd and unjust to prosecute people for consensual sex, the bigger news is that the victim of an attempted murder and domestic violence, who turned to law enforcement for protection, has instead found not only her consensual lover arrested for consensual sex, but herself as well! What kind of message does this send to victims of violence? "We're going to pry into your sex life and prosecute you!"?!?

Maunette Loeks reported at starherald.com in a story headlined "Scottsbluff man accused of incest"(probably written to evoke thoughts of some older man molesting a little child)...

A 19-year-old man is facing a felony incest charge after allegations came to light during a domestic violence call Monday. Scottsbluff police responded Monday at about 7 p.m. to a home on West 14th Street. A teen-aged girl at the residence reported that her mother had assaulted her the previous evening, using a coat hanger to strangle her.

So there are allegations of attempted murder, but they lead with the "incest" charge.

According to the arrest affidavit, the girl told police that the conflict began after the mother learned that she and a half-brother had begun to experiment with consensual sex.

Here's where things get a slightly murky. Other reports have the girl's age as 16. Many US states have the age of consent as 16, and/or "Romeo and Juliet" laws that say someone the age of 19 is not committing a criminal act if they have consensual sex (with a nonrelative... perhaps a complete stranger) with a 16-year-old. Some sources I found say the age of consent in Nebraska is 16. Others say 17, with no exceptions for being close in age. If the 19-year-old violated the age of consent, how about sticking to a statutory rape charge, as long as that is standard in cases where they 16-year-old claims it was consensual?

The two had not grown up together and the girl had moved in with her mother about a year ago.

So this is likely a case of Genetic Sexual Attraction.

The girl ran away from home over the weekend, but was located in Cheyenne, Wyo., where she had been waiting for a bus to California. The girl told police her mother became aware that she was pregnant and they argued about it after she returned home. During the argument, the girl said, the mother told her sister to retrieve a coat hanger and strangled the girl from behind as she sat on a couch.

The suspect later went to the police station and volunteered to provide a statement. He allegedly told police that he and the girl had started a relationship in January.

BIG MISTAKE!!! He should have heeded this advice.

The mother of the girl has not been charged, police said, but the incident remains under investigation.

OUTRAGEOUS!!! Who is the danger to others?!?

Here is Ryan Murphy's report at kotanow.com, which gives the male's picture and name.

If Nebraska's age of the consent is 17 without exceptions, then an argument can be made that he should be charged with a crime for violating that. But law enforcement didn't do that. And they have actually gone on to prosecute the 16-year-old girl for "incest," the girl who was allegedly the victim of an attempted murder by her own mother! Well then who is the victim of the incest, according to law enforcement? This is so infuriating. All laws against consensual incest need to be removed. There is no good reason to have them.