The Mystery of the Northwestern Settlement - the Plot Thickens

A few weeks ago, we wrote about this curious case.

How the Case Stood

Northwester University, a prominent research university, settled charges it had mismanaged US government grant funds.  While it did not admit guilt, and specifically exonerated the faculty leader on whose watch the mismanagement allegedly occurred, the settlement and most of its coverage strongly suggested wrongdoing by the faculty member in charge of the scientific conduct of the grants, Professor Charles L Bennett.  While the alleged financial mismanagement was of funds in the mere millions, a relatively small amount as federal fraud cases go, and there were no allegations of anything harmful to patients, or of any research misconduct, the investigation involved multiple federal agencies, including the Federal Bureau of Investigation.  The settlement of charges of financial mismanagement, not research misconduct,  included unfavorable references to Dr Bennett, who as Principal Investigator should have been in charge of the scientific conduct of the grants, but not of their financial management.  Much bigger cases of alleged fraud, involving hundreds of millions of dollars, and potentially harm to patients due to overuse of dangerous drugs or devices, have not involved the FBI, and not included any disparagement of individuals who could have authorized, directed, or implemented the alleged misbehavior.

None of the initial press coverage noted the peculiarity of these aspects of the case, nor provided any explanations for them.

Days later, the Cancer Letter published a long article in this case, which is now available without a subscription.  This article includes even more curiosities that raise even more questions.

In the original media coverage, Dr Bennett was accused based on complaints by a whistle blower.  For example, in an article in the Chicago Sun-Times,

However, the story in the Cancer Letter suggests Dr Bennett had tried to blow the whistle himself.  First,

Bennett said the allegations that he spent NCI money on dinners and vacations were inaccurate. He said he had encountered administrative irregularities at Northwestern and reported them to compliance officials.

'I reported administrative issues by Northwestern University with my grants to the university compliance officer in 2006, just prior to my long-term bout with cancer that was diagnosed there,' Bennett said to The Cancer Letter. 'I have never had a single administrative discussion about the matter with anyone.'

Bennett’s statement about lax administration of grants at Northwestern appears to be bolstered by an aspect of the scandal that has escaped media attention even as multiple news stories in Chicago and national outlets focused on the settlement.

The Cancer Letter has learned that days before the settlement with Northwestern was announced, a former research administrator at the Division of Hematology and Oncology at the university’s medical school pled guilty to felony charges stemming from administration of Bennett’s NCI grants.

According to documents filed in the U.S. District Court for the Northern District of Illinois, Feyifunmi Sangoleye, the rogue administrator, set up an elaborate scheme to divert $86,000 to her personal accounts.The proceeds financed a wedding and a honeymoon in Europe, court documents say.

Bennett said that he saw irregularities in the actions of the research administrator who handled his Research for Adverse Drug Events and Reports and that he has alerted the administration of the Division of Hematology and Oncology.

That same administrator, Sangoleye, pled guilty to larceny and theft, admitting to having embezzled NCI funds from Bennett’s program into a checking account created in the name of a fictitious contractor.

According to court documents, Sangoleye created a vendor code for a fictitious entity she called ATSDATA.

Then she created 10 false invoices from that entity and paid them with Northwestern’s checks.

The checks were sent to the ATSDATA post office box, which Sangoleye had rented, and placed into a bank account she created.

Between June 29, 2007, and July 29, 2008, ATSDATA received eight Northwestern checks that added up to $86,000. 'Sangoleye converted the proceeds of the ATSDATA checks to her own use and to the use of another' individual, the plea agreement states.

'I knew nothing about ATSDATA,' Bennett said in response to questions from The Cancer Letter. 'The administrator told me that ATSDATA was the billing address for the University of Illinois Survey Research Laboratory, a formal subcontractor. I did not know that the Survey Research Lab had any particular billing name. I have documented this to Jonathan Licht [chief of Northwestern’s Division of Hematology/Oncology] in 2008.'

So in summary, Dr Bennett, who was responsible for the scientific integrity but not the financial management of his grants, reported financial irregularities to Northwestern managers.  These reports lead to a guilty plea by a former Northwestern manager who admitted embezzling money.  However, this guilty plea was anechoic.  It did not appear in any media accounts.  The settlement negotiated between Northwestern University and the government did not acknowledge it.

Northwestern officials declined to discuss Sangoleye, saying only that she had been employed by the university as a research administrator from February 2006 through August 2009.

The Cancer Letter suggested why the university might have had an interest in keeping the Sangoleye crimes and its settlement of the allegations about Dr Bennett apart.

Northwestern University might have had an interest in keeping the Sangoleye criminal case and its civil case separate.  However, the government did not obviously have such an interest.

Why did the government not address Sangoleye's crimes in the settlement it made with Northwestern University?

The Ambiguities of the Named Whistle Blower's Work

As we noted in our earlier post on this case, the role of the named whistle blower, Melissa Theis, was unclear, especially vis a vis Dr Bennett.  Although Dr Bennett as Principal Investigator of some of the grants involved ought not to have had any direct control of the financial management of the grants, Ms Theis apparently worked in some financial management capacity.  Yet Ms Theis apparently blew the whistle on the university, and on Dr Bennett for alleged financial, not research mismanagement.

Several observers were surprised to see that the relator, Theis, was never employed by the cancer center.

According to her 2009 suit, Theis came to Northwestern as a temp two years earlier, in 2007, serving as a purchasing coordinator for the Division of Hematology and Oncology. The division, which is separate from the cancer center, administered all but one of the grants in question, the NIH database shows.

After a year, in 2008, Theis was hired as a fulltime employee of the Northwestern Medical Faculty Foundation. The foundation, which runs the medical practice, is also separate from the cancer center. She left Northwestern in October 2008.

Who really administered these grants, and why did the settlement minimize the responsibility of university managers while apparently blaming scientists for bad financial management?

In our first post on this case, we had contrasted how the settlement and media coverage of it appeared to heap blame upon Dr Bennett alone, while not attaching any responsibility to his academic supervisor on one hand, or any university managers on the other.  We noted that Dr Bennett, after having been a consultant for Amgen,  had become known as a "pharmascold," a skeptic of pharmaceutical industry practices, and the author of research that suggested one Amgen product was more hazardous than had been previously thought.  His supervisor, on the other hand, had multiple ongoing financial ties to the pharmaceutical industry.

The Cancer Letter suggested others were trying to connect related dots. First, in general,

Making enemies is an exhaustively studied side effect of probing the safety of cancer drugs, and during much of the period in question, Bennett was producing more than his standard quota of foes.

Now, researchers who worked with Bennett on the ESA issues are puzzled by his legal problems.

'Charlie has been an important voice in raising concerns regarding the use of erythropoietin in patients with cancer,' said Anthony Blau, co-director, Institute for Stem Cell and Regenerative Medicine at the University of Washington. 'In particular, his 2008 metaanalysis, published in JAMA, heightened awareness of the issue and helped to reduce the indiscriminate use of erythropoietin in cancer patients.'

Blau is a co-author on the JAMA paper [as noted in our previous post.]

'This doesn’t really fit in his picture,' said Michael Henke, a radiation oncologist in Freiburg, Germany, who was the first to stumble across potential problems stemming from overuse of ESAs.

'You might recall, we got in contact in 2003 when our group communicated potential dismal effects of erythropoietin on cancer patients—a story not really appreciated these days because of economic interests,'  Henke said referring to the pioneering paper in The Lancet. Henke was the senior author on the JAMA paper.

'However, Dr. Bennett and we consistently gathered additional data that were finally reported as a meta-analysis in 2008. Consequently, erythropoietin prescriptions dramatically decreased, eventually prolonging or even saving lives of cancer patients.'

'While collaborating, I did learn him as extraordinarily active, alert-eyed colleague who strictly adhered to serious scientific conduct and to the wellbeing of patients.'

Henke confesses to wondering whether the many powerful enemies Bennett made in the pharmaceutical and biotechnology industries have struck back.

'We shouldn’t feed paranoia,' Henke said.  'However, given the exclusively positive experience when collaborating with his group, makes me wonder whether this litigation might follow some very particular other issues.'

Did Dr Bennett's transformation from a consultant to to a fierce scientific skeptic of the pharmaceutical industry influence the handling of this case, and its media coverage?

The coverage by the Cancer Letter underscores our previous concerns, so I will simply repeat the summary from my last post.

The settlement by Northwestern University, which was mainly about allegations made against Dr Charles L Bennett, who was not a party to the settlement, was very different that the vast majority of the march of legal settlements whose continuation we have frequently discussed.

The settlement and its media coverage raised important questions whose answers would be important to the assessment of  our current regulatory and legal response to misbehavior by and within large health care organizations.  Health Care Renewal is about raising such issues by commenting on public information, media reports, and research.  I hope those with capacity to investigate will consider these questions.  Inquiring minds want to know. 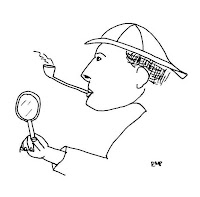