I was asked recently what my favorite millipede is. That's not an easy question, but I was forced to pick one, so I thought about it for a bit and then figured, why not share it with everyone? I find myself doing more tweeting than blogging lately, but Twitter is terrible for long form responses.

There are about 12,000 described species of millipedes, and I've seen maybe 70 of them in life or in photos, so I'm drawing from a limited pool of millipede diversity. Even so, I know of many amazing species. Is my favorite something like the shocking pink dragon millipede, Desmotyxes purpurosea? 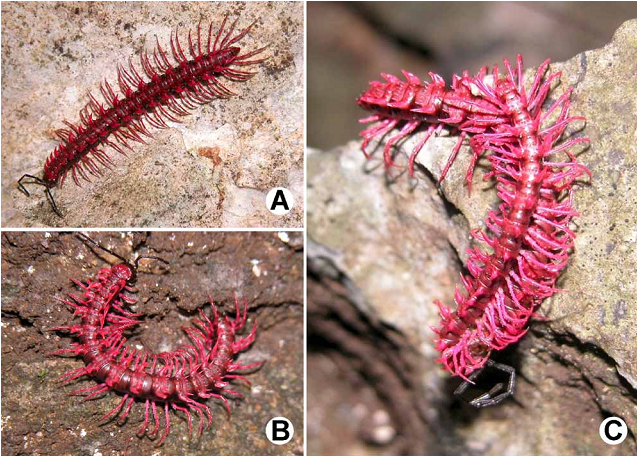 Desmotyxes purpurosea from Enghoff et al 2007. Read the paper, it's really neat!
Or maybe my favorite is another tropical millipede. After all, Psammodesmus bryophorus, a millipede I've blogged about before, has mosses that grow on its back! 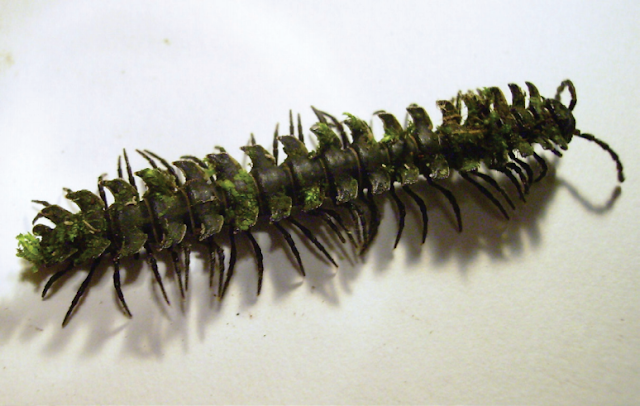 Photo from Martínez-Torres SD et al 2011.
You won't be disappointed if you browse photos of millipedes from the tropics. There are many forms that are beautiful and seem almost alien, but I'm still biased towards the temperate forms I'm used to. Even among these North American millipedes, I'm not left with boring species. In fact, it's quite the opposite.
California has some of the world's most amazing millipedes. There's this millipede genus, Motyxia, that occurs in only a few counties there. Apparently all the species in the genus weren't content with the fireflies in the western US, which usually don't bioluminesce as adults like they do in the eastern US (there are different species out west). So, they took it upon themselves to pick up the slack, with marvelous results.
The eight species of Motyxia all bioluminesce. 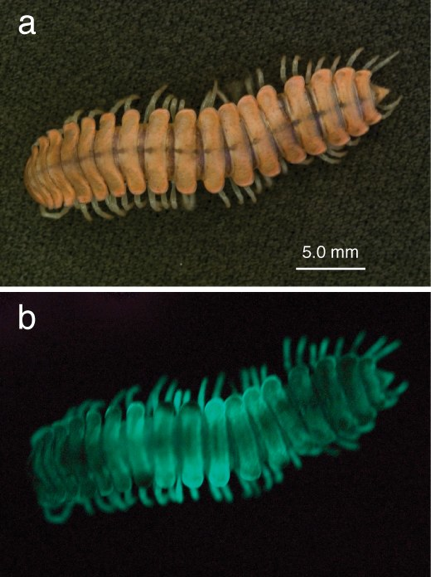 Motyxia sequoiae (a) under normal light (b) bioluminescing, from Marek et al 2011. Read more about this genus here.
Out of all 12,000 known species of millipede, only these ones bioluminesce. Isn't that amazing? Certainly bioluminescence makes for a strong contender for "favorite millipede." But still, it's not quite my favorite. To be fair, my own bias is sneaking in now. I've never had any interactions with Motyxia, so they're still esoteric to me. To find my favorite millipede, I need to go closer to home.
It just so happens that home for me is Ohio, in the foothills of Appalachia. The Appalachian Mountains host an amazing array of diverse millipedes, including many in the family Xystodesmidae. This family features some of the continent's most colorful millipedes, which have a habitat of exhibiting aposematism: their bright and bold colors act as a warning to predators that they have chemical defenses. 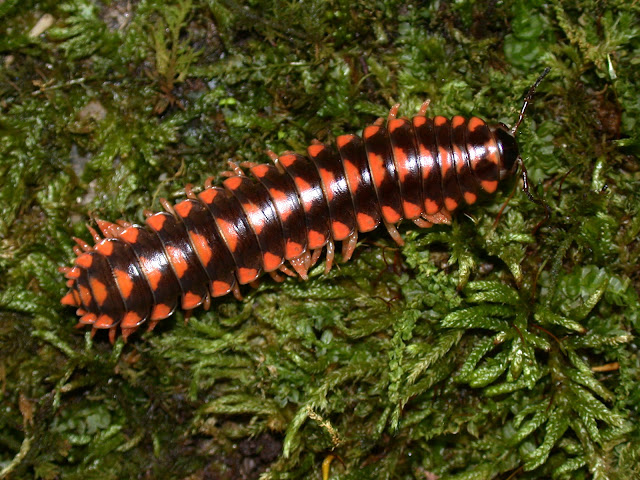 Brachoria dentata, a Xystodesmid millipede that displays aposematism. Photo taken by Paul Marek.
Xystodesmid millipedes have mastered Müllerian mimicry. Their color patterns successfully deter predators and confuse taxonomists. Browse around Paul Marek's Tree of Life page on the genus Brachoria and BugGuide's photos of the family and you'll quickly see why: there's a lot of variation in color forms within genera and even within species. They all build on the theme of  black with bright, bold spots of color, resulting in some of our prettiest millipedes. I'm partial to the black and blue species, personally.
After writing around which species is my favorite, I should finally nail it down. As I said, it's not easy. There are so many neat species, and my favorite comes down to one that I found soon after I began studying millipedes. Influenced by my personal history, here is my favorite millipede: 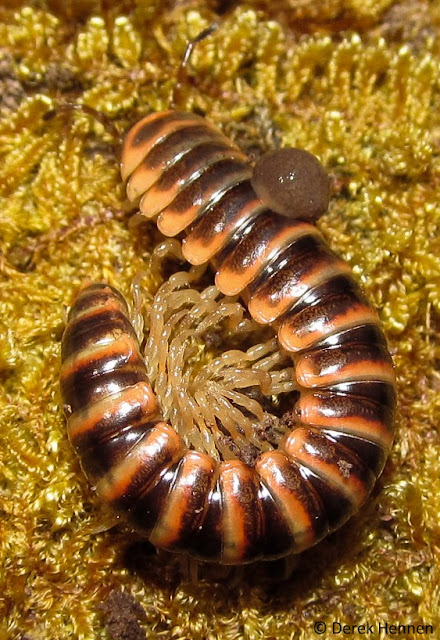 Semionellus placidus, a millipede without a common name. Yeah, that's poop on its back.
Semionellus placidus is a millipede in the family Xystodesmidae. It's classified in the tribe Chonaphini, which has most of its species in the Pacific Northwest of North America, but this one makes it out east. It's sporadic in its occurrence, and I've only found it at one site near my hometown in Ohio, though it's been reported from a few other Ohio counties. 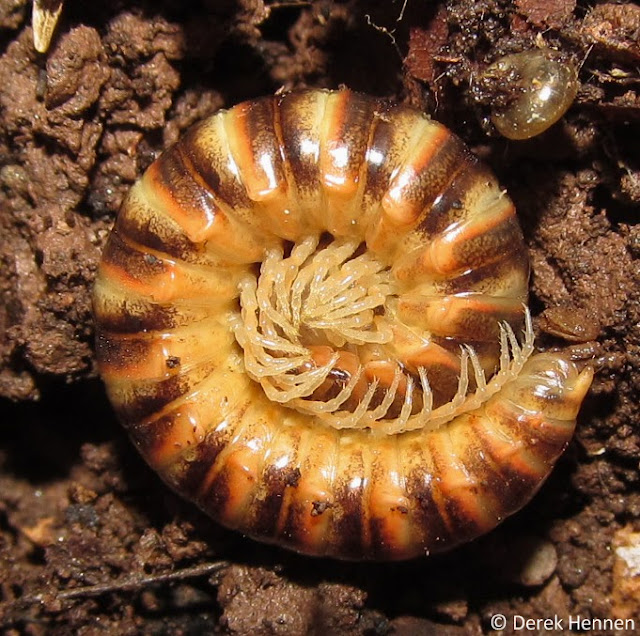 Curled up in defensive position
What's so special about this millipede? It's not nearly as bright and colorful as other Xystodesmids; instead it sports a comparably drab brown and peach-banded color scheme. But it's the memories I have surrounding this millipede that makes it so special.
The first time I came upon this species was during a night hike. I wanted to see what bugs I could find at night, and I had a couple of good friends volunteer to come along with me as I searched. We found some neat insects--including moths and a dragonfly hanging from a tree--but the best find of the night came when I turned on the UV flashlight I had brought along. I shined the light over the leaf litter, and to my surprise, I found many small millipedes moving amongst the leaves like tiny trains, shining an ethereal blue-green under the UV light. 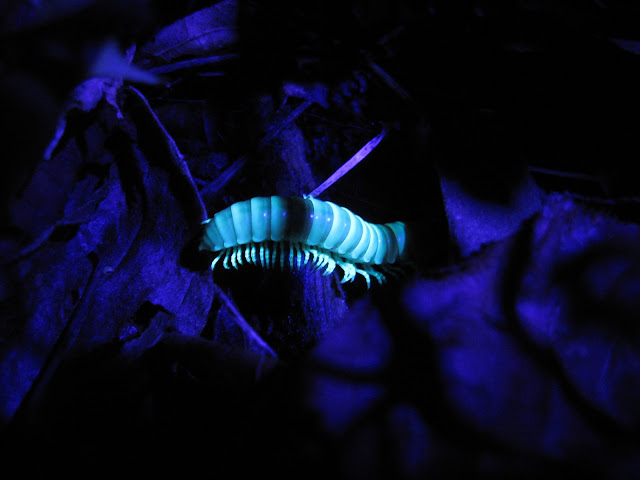 Semionellus placidus under UV light
I had heard about millipedes that fluoresce under UV light before, but this was the first time I had seen one for myself. (Note that UV fluorescence is different from bioluminescence. Fluorescent millipedes don't produce their own light, they just fluoresce under the UV light source, but stop when that source is taken away. The bioluminescent Motyxia millipedes, on the other hand, produce their own light.)

Semionellus placidus (left) under natural light (right) under UV light. Photo by Dave McShaffrey and featured in UV fluorescing millipedes from southeastern Ohio
It was exciting to witness, almost like I was watching something secret. The millipedes don't stand out in the dark at all; I didn't see them until I turned on the UV light. I was intrigued, so of course I collected some to take back to the lab. That was the first time I was really exposed to identifying millipedes on my own. This was during fall of 2011, and a few months before I had attended a millipede identification workshop taught by Bill Shear, where I learned the basics of millipede identification and obtained some print references I needed to identify millipedes.
I did the best I could and narrowed it down to the order Polydesmida and family Xystodesmidae, a big accomplishment for me at the time. I didn't have a key to Xystodesmid genera, so I turned to BugGuide, where I uploaded a few photos. Rowland Shelley pointed me to Semionellus placidus, and I was able to confirm the ID by looking at a male's gonopods and comparing it to old literature records that had pictures of the gonopods. 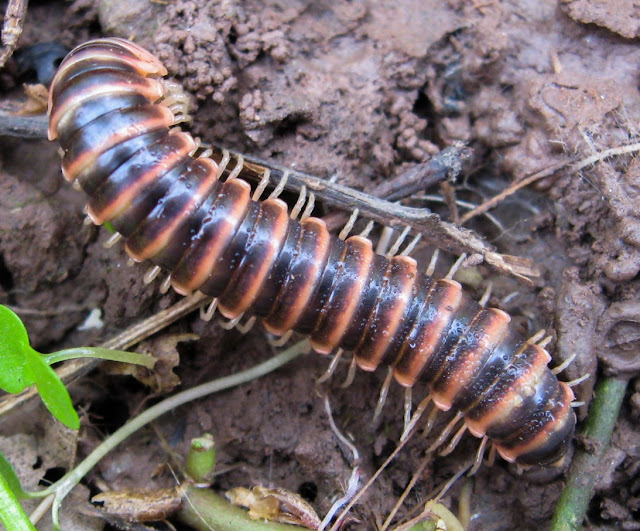 It was beyond fulfilling to identify this millipede at last. I learned a lot about millipede identification from the experience: the importance of collecting a few individuals (and hoping to catch a male), which features are useful for identification, the necessity of going to the experts, and the legwork it takes to track down scientific literature on millipedes, much of which is old and the only source to find information on some species. It took many hours, but was well worth it. Being able to identify your local species, whether they're flowers, birds, insects, or millipedes, is a powerful feeling.
I realized pretty quickly that there isn't much information on millipedes that is accessible to the general public. Millipedes are difficult to identify, they're not immediately showy and beautiful like butterflies, and there aren't many scientists researching them, which puts up more barriers for someone with an interest in millipedes. Essentially, unless you're someone who already studies Entomology, you're not going to have an easy time learning about millipedes, and that's a shame.
Due to this, I've taken it upon myself to do what I can to make millipedes more accessible to the general public and altogether more compelling for people to pay attention to. Most of my millipede projects have grown out of finding Semionellus placidus and working with the species.
"What's your favorite millipede?" As I thought about the question, it became clear that bioluminescence and bright colors are cool, but there's no way they can surpass the learning experiences I gained from finding an inch-long millipede in the woods.
References:
Enghoff, H., Sutcharit, C. & Panha, S. 2007. The shocking pink dragon millipede, Desmoxytes purpurosea, a colourful new species from Thailand (Diplopoda: Polydesmida: Paradoxosomatidae). Zootaxa 1563: 31-36.
Marek P.E., Papaj D.R., Yeager J., Molina S. & Moore W. 2011. Bioluminescent aposematism in millipedes. Current Biology 21: R680–R681.
Martínez-Torres SD, Flórez Daza ÁE, Linares-Castillo EL. 2011. Meeting between kingdoms: discovery of a close association between Diplopoda and Bryophyta in a transitional Andean-Pacifc forest in Colombia. In: Mesibov R, Short M (Eds) Proceedings of the 15th International Congress of Myriapodology, 18–22 July 2011, Brisbane, Australia. International Journal of Myriapodology 6: 29–36. doi: 10.3897/ijm.6.2187
2:03:00 PM
Unknown
Bioluminescence, millipedes, Semionellus placidus, UV fluorescence
Email ThisBlogThis!Share to TwitterShare to Facebook