Apheloria west of the Mississippi River

If you haven't yet noticed, I'm fond of writing about millipedes. Since I moved to Arkansas, I've seen a few species that don't live in Ohio, which is exciting--it's nice to see more millipede diversity.

A wide-ranging genus in the eastern United States is Apheloria (Family Xystodesmidae). It contains species that utilize cyanide as a chemical defense and exhibit aposematism to warn predators to leave them alone (this is common in the family).

Apheloria virginiensis is the most widespread species in the genus, and has five subspecies. Two of them occur west of the Mississippi River: Apheloria v. iowa and Apheloria v. reducta. A. v. reducta is a bit more widespread, being found in Kansas, Oklahoma, Arkansas, and Missouri. I recently came across this millipede in a leaf litter sample in Arkansas. 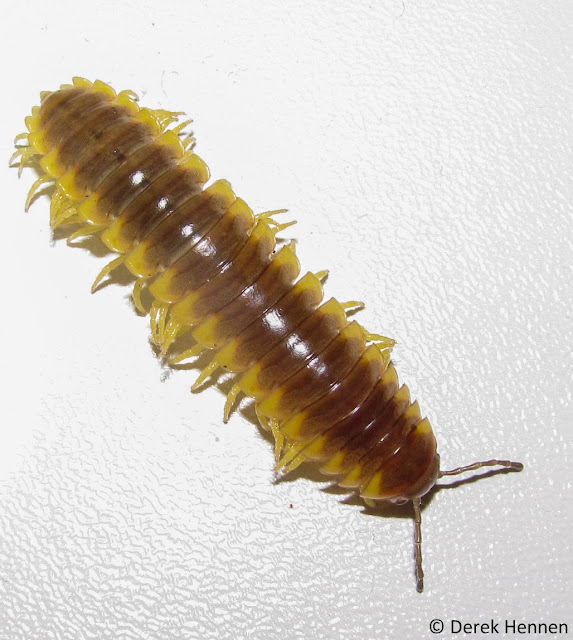 Apheloria virginiensis reducta
Instead of the bold black usually seen in A. virginiensis, this one sports a chestnut brown color. I wasn't quite sure of the exact species (Pleuroloma flavipes looks similar) until I looked at its gonopods, which confirmed its identity. 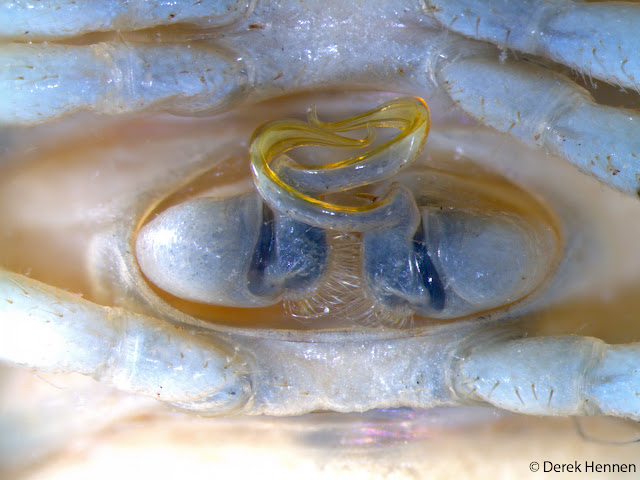 Gonopods of A. v. reducta
They're marvelous, aren't they? The gonopods are modified legs, these being the 7th pair. The blue-ish hue is a byproduct of the killing process--it would appear yellow-white normally, but it makes for a great photo. The gonopods transfer sperm to the female during sex.
For sexual structures, they're quite pretty.
1:18:00 PM
Unknown
Apheloria, Arkansas, millipedes
Email ThisBlogThis!Share to TwitterShare to Facebook