Standing on the shoulders of giants

When doing a lot of research with older literature, you start to gain a strange sense of respect and familiarity with authors that are by now long gone. I've written about this before, with regards to Samuel Hildreth, but lately, I've had a different connection with another scientist who has passed.
Usually, when I visualize these old scientists, I imagine senior scientists writing with a large degree of certainty, brought on by their age. Of course, this isn't an accurate visualization, but it's been my go-to imagery. It's sort of a pleasant surprise when I find out an author is younger, especially when they're in their early 20s, since that's where I am right now. It's easier to connect with another 23 year old than a 35 year old. It also impresses me and motivates me to match that level of commitment.
Those were the thoughts swirling around my head when I came upon the papers of Charles Harvey Bollman, born in 1868 in Monongahela City, Pennsylvania. He went on to attend the University of Indiana at Bloomington, and apparently took quite an interest in the myriapoda of the United States: the millipedes and centipedes, along with their lesser-known relatives, the symphylans and pauropods. Bollman had a pretty open field, so he chose well. C.S. Rafinesque published the first recognized work on myriapoda in 1820. He was followed by Thomas Say in 1821, which helped in cracking open the door for others to tackle the creatures. Notable scientists working on the American myriapod fauna throughout the 1800s included Johann Friedrich Brandt, George Newport, Carl Ludwig Koch, Oscar Harger, Jerome McNeill, Horatio Wood, Edward Drinker Cope, and Lucien Marcus Underwood, among others. Despite the work of these scientists, the knowledge at the time was characterized as "fragmentary."
Since standardized methods and descriptions were still being worked out during this time, the literature can be confusing to go back to due to changes in nomenclature and many species being synonymized (after a species has been described more than once, unknown to other taxonomists). This primary literature is still important, however, as some of the species accounts have information that's difficult to find anywhere else. It's also a historical curiosity to read the descriptions--they look positively barren compared to how myriapods are described today, with many characters being discussed that can go on for paragraphs and pages.
It was into this atmosphere that Bollman entered. There was no BugGuide to post photos of specimens to be identified by experts, nor was there much of an alternative to sending a letter to an expert with a question and hoping to hear back. After being spoiled by the internet and its treasure trove of resources, I consider that kind of terrifying. The way I've learned about millipedes and centipedes has been to use the internet to pull journal articles from decades, even centuries ago, and read them. A healthy dose of searching for photos to compare with (followed by crying over the paucity of verifiable photos online) has made learning about myriapods pretty easy as of late. Yet Bollman jumped at the challenge, and intended to synthesize the contemporary knowledge of North America's myriapods while simultaneously adding to it.
He really did relish the challenge: he published his first paper, Preliminary descriptions of ten new North American Myriapods, in 1887. He was 19 at the time. 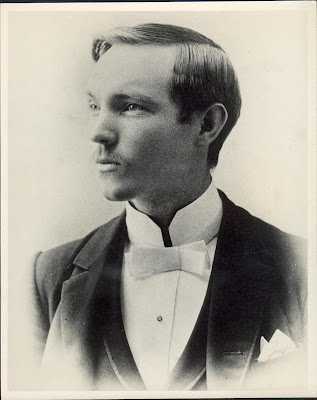 Charles Harvey Bollman, courtesy of Dr. Rowland Shelley from his site, NADiploChilo.
Remember how I mentioned my image of senior scientists writing papers? That fact definitely turned my mental picture on its head. Bollman was described as an "exceptionally bright student," and his published papers reflect that. The president of the university at the time, David S. Jordan, thought of him as "one of the most brilliant and promising" students he had known--quite a compliment. This sentiment was shared by many, it seems. Bollman graduated with the class of 1889, when he was just 20, and then took a job with the United States Fish Commission in Georgia. By this time, Bollman had published 15 papers on Myriapods in just a few years, quite an accomplishment. He described 31 new species and 3 new genera. You could say he was pretty active.
He was getting off to a great start after university, but on July 13, 1889, he died at Waycross, Georgia.
That's 124 years ago today.
I can't find any reference to how he died, but that's not really important. Bollman wasn't yet 21 when he died, but it didn't stop him from publishing prolifically. After his death, Bollman's papers were purchased by the Smithsonian Institution, and in 1893, his published and unpublished papers were collected and published as The Myriapoda of North America, edited by  Lucien Marcus Underwood. This was done as a memorial to Bollman and his work. In addition to his 15 published papers, it included 11 unpublished papers that he had been working on.
I encourage you to take a look at it: it's free on GoogleBooks, the Biodiversity Heritage Library, and elsewhere online. It truly is a fitting memorial for Charles Harvey Bollman, and it struck a particular note with me. I'm older than Bollman was when he died,  but not by much. When I found out he was so young when he died, it shocked me in a profound way. It's not often that I'm faced with the unyielding fact that indeed, I am mortal, and I will die someday.
I've been thinking lately about my "legacy," if you'll excuse how pompous that sounds. I mentioned a few weeks ago that I've deposited over 300 specimens into the Marietta College arthropod collection, and I strove to prepare the specimens correctly, so that they could still be useful long after I'm gone. When I did that, I was thinking about Samuel Hildreth, and how some of his collection is still with us, and remaining useful. After learning about Bollman, my perception has changed a little, though I can't quite explain why. Perhaps it's because Bollman worked on myriapods, a group that not many scientists pay much attention to. I feel more of a connection to old works focused on myriapods, since it's a smaller community that can be inaccessible at first, and that connection extends to the old authors of various works.
I mentioned to a friend recently that I enjoy visiting insect collections and libraries, due to the connection I feel to the past as I look at specimens and old works. They wouldn't exist without the hard work of people who are long gone...dead for years, decades, centuries. I have a deep respect for those people: painstakingly collecting, writing, and labeling for whatever goal they considered bigger than themselves. Some (such as Hildreth) led long lives, while others (like Bollman) made the most out of the short time they had. The thread connecting them to the present day, to those of us currently using their research for our own purposes, isn't even broken by time. We have a powerful responsibility to do what we can to preserve that knowledge and hard work so that it can keep connecting onwards to the future, and I've come to understand this:

There's nothing as humbling as reading about the past lives, hard work, and trials of the scientists who have preceded you.

I'm going to keep thinking about the story of Charles Harvey Bollman, and do what I can to preserve his legacy through my small contributions. It's easy to forget that science is linked together by personal stories. There's a face behind every discovery (in the vast majority, it's many faces), and we'd do well to not forget those faces.
Reference:
Bollman, Charles Harvey. Ed. Underwood, L.M. 1893. The Myriapoda of North America. Bulletin of United States National Museum 46. 210 pp.
8:00:00 PM
Unknown
Charles Harvey Bollman, millipedes
Email ThisBlogThis!Share to TwitterShare to Facebook