My millipede research always seems to throw me into new adventures. Neat information just sort of hangs out in the old literature, sometimes in the form of a new species that no one is quite sure about.

The species in question is Chaetaspis albus. Sort of. First, we'll go over the information we have about this species.

Chaetaspis albus (no common name, sorry) was described by Charles Harvey Bollman in 1887 (Entomologica Americana, II, 1887, pp.45-46). It's a millipede in the order Polydesmida and family Macrosternodesmidae. His description was also included in an 1893 publication of his works, which is great, because that means I can post the whole thing here without having to worry about copyright. If it's tough to read, you can click the photo to enlarge it. 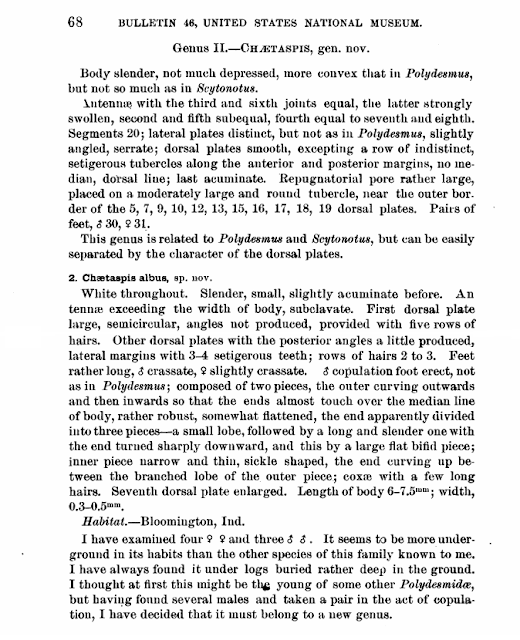 From Bollman 1893
So there's our information on the original specimen. It's white, less than a centimeter long, less than a millimeter wide, and was found in Indiana under a log. That's a millipede that's easily missed, but it was later found in Arkansas, Kentucky, Tennessee, Alabama, Mississippi, and Virginia as well.
Now we come to the real mystery. In 1928, Stephen Williams and Robert Hefner published The Millipedes and Centipedes of Ohio in the Ohio Biological Survey Bulletin. In it, they noted a few specimens of C. albus from Washington and Athens Counties which were much larger than those in Bollman's description. Williams and Hefner noted the species from the two counties was 15mm long and about 1mm wide, quite a difference from 6-7.5mm long and 0.3-0.5mm wide. Reluctant to declare a new species based on size alone, they left it alone with an acknowledgement that it was strange. 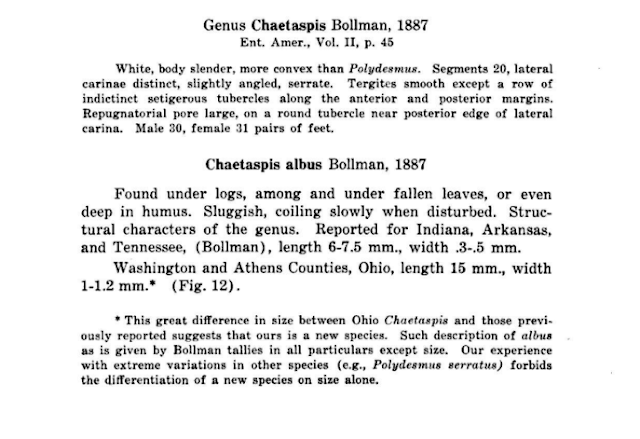 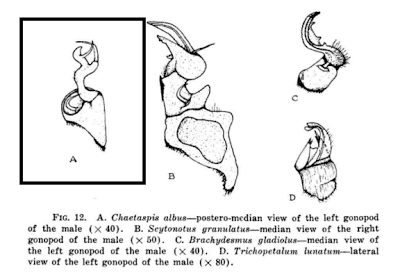 Fig. 12, with gonopod of Chaetaspis albus? outlined in black. Williams and Hefner, 1928
It was an oddity that was left alone until 1950, when Dr. Nell Causey revisited it, noting the illustration of the gonopod differed from Bollman's description. She deemed it distinctive enough to be its own species, which she named Chaetaspis ohionis. It's unclear whether or not she was able to examine the type specimen, which was listed by Chamberlin & Hoffman (1958) as being in the Miami University arthropod collection. Somewhere along the line, however, the type specimen was lost (Lewis & Slay 2013). That means now no one can look at the specimen Williams and Hefner were looking at to see what it actually was: all we have is figure 12 and their description.
So...that leaves us at a brick wall. Hoffman (1999) wrote that the millipede isn't even a species of Chaetaspis, and is probably part of a different family, in his opinion. But if it's not a Chaetaspis sp., then what is it? Williams and Hefner were convinced that it matched Bollman's description of Chaetaspis albus, except for its larger size.
This might seem like a waste of time, since we have no type specimen. But it's an intriguing mystery to me, since I'm from Washington County. It would be super neat to mount an expedition and find the millipede that Williams and Hefner did (albeit a difficult one, since they didn't specify the locality), and it could corroborate (or not) Chaetaspis ohionis being a new species.