Dead Logs are a Wasp's Aphrodisiac

I set out on a hike today in search of anything neat I missed during yesterday's hike, which I started too late to take full advantage of the daylight. I made it through the entire trail today, and had quite the detour along the way. I stopped by a dead Sycamore tree to look for beetles, since I found a neat species of Osmoderma beetle in it last year, but no dice this time. I trudged on, arriving at a small area with some fallen trees, and decided to stay a while.

I quickly noticed that there were wasps flying around EVERYWHERE. Thankfully, these were Ichneumonid wasps in the genus Megarhyssa, which are harmless to humans. 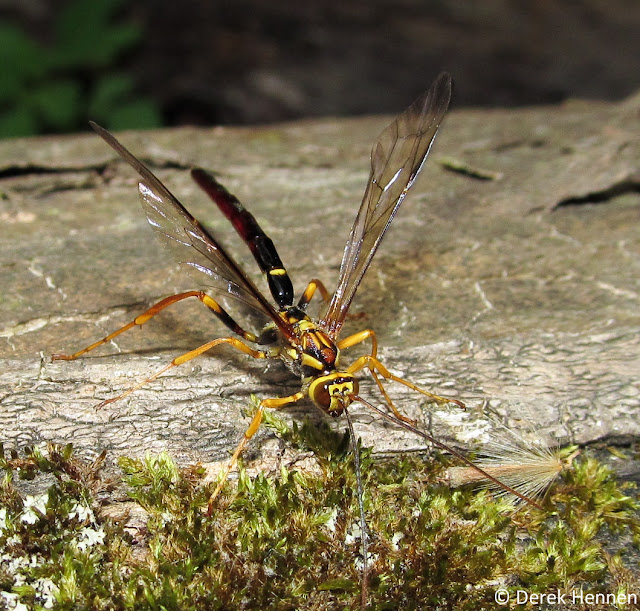 A male Megarhyssa sp. wasp.
There were dozens of males like the one above flying around and landing on the fallen tree I was examining. Some were larger with vaguely different markings, indicating that I had at least two different species around, which seems to be normal for the genus, I usually see groups of more than species. The males were gathered to find females, which lay their eggs in dead logs. I was surprised at their sheer numbers this time--if I had a phobia of wasps I might have passed out!

When it comes down to it, you're looking for the same thing the males are: a female, which surpasses the males in the coolness department... 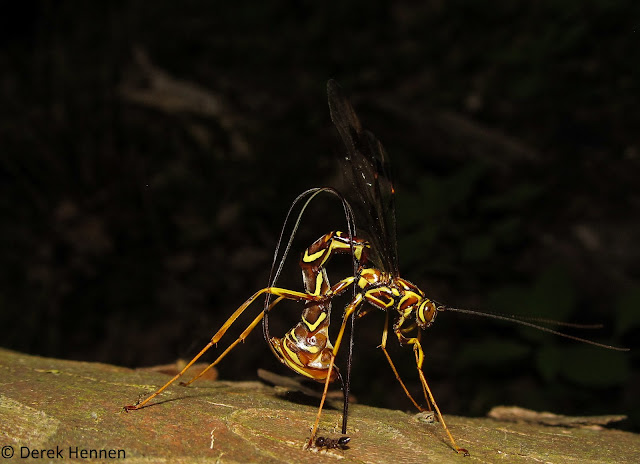 Female Megarhyssa macrurus, drilling into the wood.
The female has a four inch long ovipositor that looks intimidating, but is thankfully not used to sting humans. Instead, it's made up of three filaments that together drill into dead wood, and upon finding a wasp larva of a horntail wasp, sting and paralyze it. The wasp then throws in an egg, which hatches and eats the other wasp larva. It's breathtaking to see the drilling process in action and the raw power of the wasp's actions is surprising. 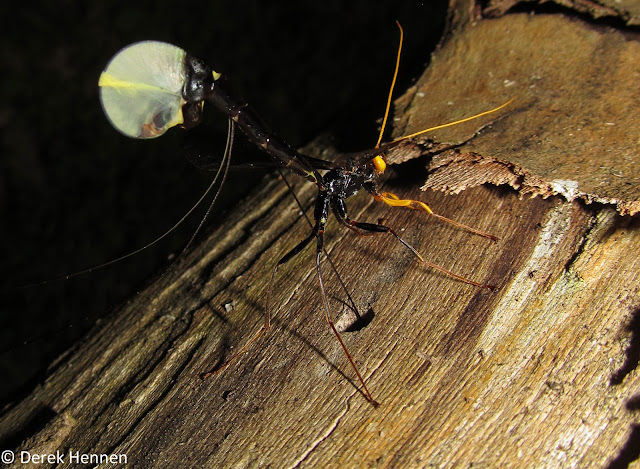 Female Megarhyssa atrata ovipositing in dead wood.
There was also another female of a different species nearby! This is Megarhyssa atrata, immediately recognizable by its jet-black body and yellow head and front legs. I've never seen this species before today and was in awe upon finding it. I actually almost missed it because it was on the same log as the female Megarhyssa macrurus, which had all my attention! It was fascinating to watch both these wasps go about their business, and I sat there for almost an hour watching them. 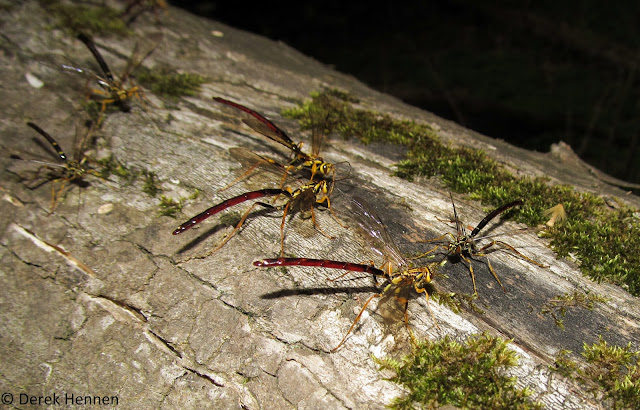 Male Megarhyssa sp. wasps hanging out and making friends.
The males were quite funny in their antics. They would scatter if I moved around too suddenly, but then return to the log within minutes. Some of them would dive bomb other males and attempt to mate with them, thinking they were females. They realized their folly after a few seconds and jumped off. Apparently it was more important for them to take every chance they had instead of dealing with unimportant things like making sure they were humping the correct gender. 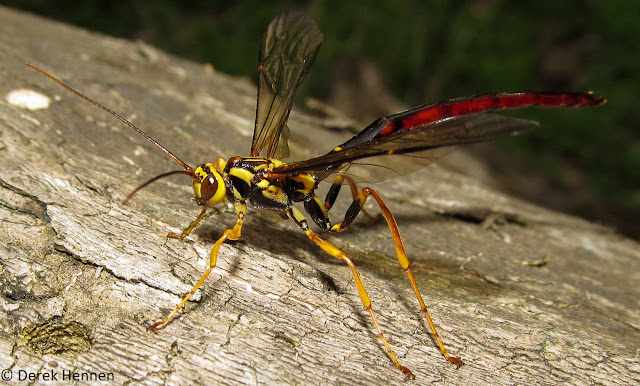 Male Megarhyssa sp.
When a female finally did visit, a few males would switch to dive bombing her in attempts to mate, but they were unsuccessful. She either flew away or shrugged them off: she had other business to attend to. 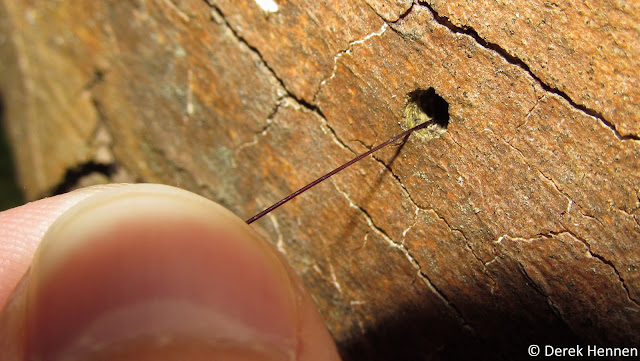 Apparently, sometimes the ovipositor can break off inside of the hole, as the above photo shows. I didn't witness it, but I found two holes like this one in the log. It probably didn't feel too great for the wasp.

Pinned Megarhyssa atratra.
You can see the disassembled ovipositor itself in the above photo with its three parts: two that work together to drill into the wood, and a long thin tube that deposits the egg. All in all, it's a stunning wasp and a beauty to find. This one is going into my collection that I bring with me whenever I give a presentation about insects, so it's sure to garner a lot of attention.
I learned a very important lesson today while watching these wasps. Well, a few important lessons. 1. Knowledge is power, especially when it's knowing that the swarm of wasps flying around are harmless and there's no reason to freak out. 2. I shouldn't tell someone an estimated time when I will be back after a hike, because I always get distracted by something cool.
5:44:00 PM
Unknown
decaying wood, Megarhyssa, Ohio, wasp
Email ThisBlogThis!Share to TwitterShare to Facebook