A Primer on Ohio Millipedes 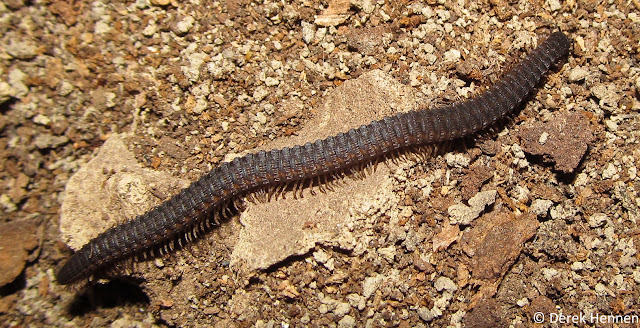 Millipede - Abacion sp.
I've been doing some research lately on a few millipede genera and have found myself lamenting the lack of well-written and accessible resources for millipedes. I have a good enough knowledge base to navigate through the published literature, but it's too inaccessible for general audiences. BugGuide's millipede page is probably the best online resource, but it still lacks good introductory resources for people wanting to learn more about the many-legged critters. You're able to submit a picture, and if you're lucky, someone will help you get it down to genus and maybe tell you how they identified it.

Concise keys for the millipedes don't really exist like they do for other arthropods, due to the characteristics used to identify millipedes. It's not like identifying a moth or a beetle, where coloration, pattern, and overall look can go a long way. You can get to Order from a photograph relatively easily with millipedes, but any deeper can be a problem without (1) very detailed photos or (2) the specimen in hand. If you're interested in taking a millipede down to species, you're most likely going to need a microscope, because at that point they're identified by the male gonopods (sexual structures). If you have a female, you'll probably have to settle for genus. 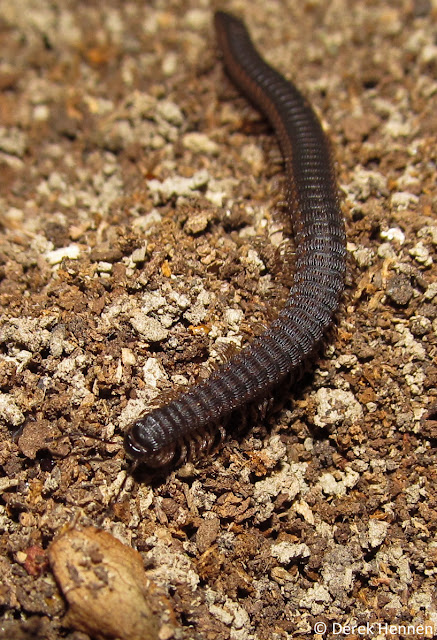 But to get to that identification, you'll need the help of a millipede expert (starting off, at least). There aren't all that many out there, and not many amateurs focus on millipedes. Instead, most beginners opt for flashier species like dragonflies or butterflies, groups which have wonderful field guides already published.

To break down a few of the hurdles that stop people from learning about millipedes, I've been gathering together some nice photos and information about my local millipede species to share, one of my goals for this blog. So far in this post, you've seen a millipede in the genus Abacion (Order Callipodida: Family Abacionidae) crawling around on the ground. I found this specimen last week in some wood frass at the base of a dead tree. I haven't keyed it out, but I'm 85% sure about my identification (Long millipede, dorsal crests, etc.). I found a similar millipede last summer, so now I know these guys can be found in the eastern and western parts of the county. I'm not sure if I'll get it down to species anytime soon since even I'm lacking resources for this genus, but it's fine for now.

I originally meant for this post to simply cover the new Abacion specimen I caught, but I can't just complain about the lack of millipede identification resources without trying to fix it...so I might as well post my other local species too! Maybe this will help other would-be millipede enthusiasts get started. You can find some more info in my previous posts about millipedes, such as Mushroom & Millipede Hunting and A Calm Millipede's UV Fluorescence. These images were all taken in southeast Ohio, but these millipedes occur in many other states in the eastern US. 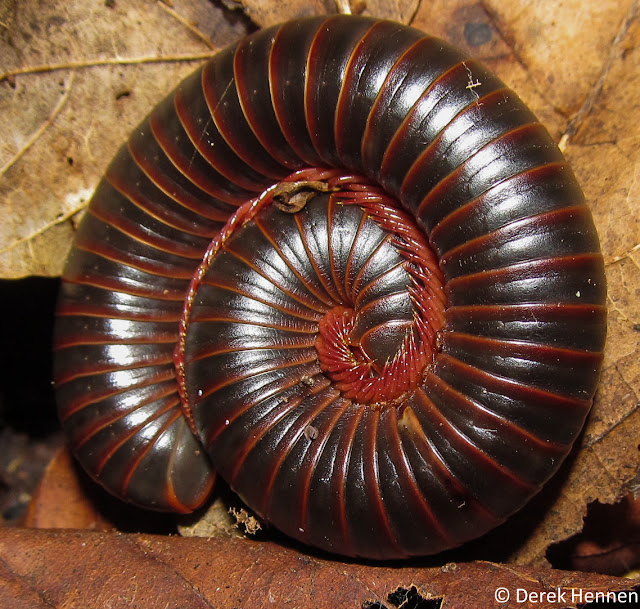 Curled up in defensive position.
This species is actually a species complex referred to as the Narceus americanus-annularis-complex, since the two species aren't taxonomically differentiated yet, but that's a technicality that I'm going to ignore for now because it's not helpful for beginners. This millipede can grow up to 4 inches long, making it the largest millipede you're likely to see in the eastern US. It can live up to two years, as I found out when I kept one as a pet. Like most millipedes, it feeds on dead leaves and other detritus on the forest floor, and it can be found under the bark of logs and by turning over the leaf litter from spring through fall. 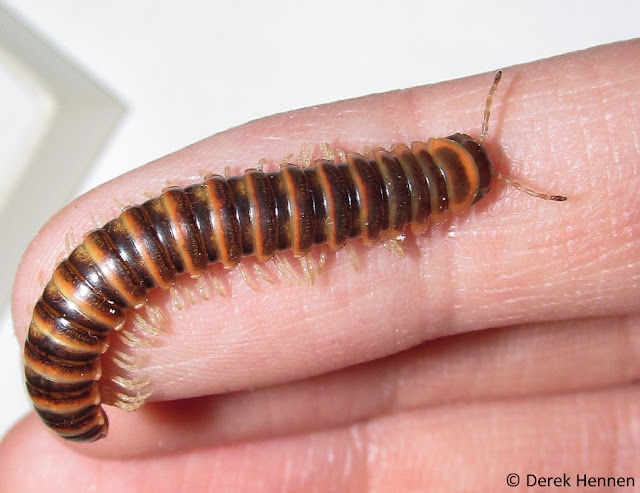 I've often posted about the above species: Semionellus placidus (Order Polydesmida: Family Xystodesmidae). It exhibits fluorescence under UV light and can also be found in leaf litter. It's about 1.25 inches long and is mostly brown with pinkish-orange stripes on the sides and back of its paranota (the extensions on its back). This species has a wide range in the eastern US, but occurs sporadically. The easiest way to find it is to go out at night with a UV flashlight and shine it over fallen leaves in a forest. If you refer to my second blog post I linked to above, you can see photos of what it looks like under UV light and photos of the male's gonopods. 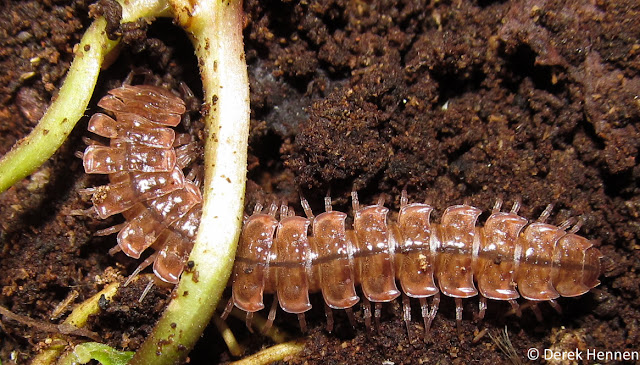 Another common species I see is Pseudopolydesmus serratus (Order Polydesmida: Family Polydesmidae), a pretty pink millipede about the size of Semionellus placidus. It can be found under rocks, under the bark of dead logs, and in leaf litter, so it's cosmopolitan in its habitat as far as millipedes go. 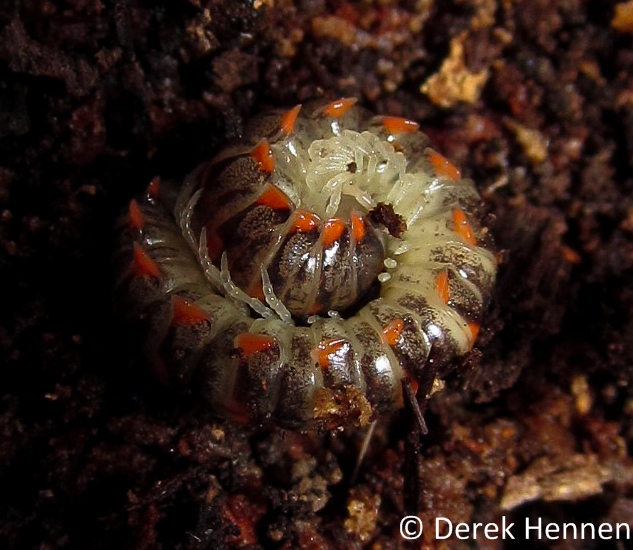 One of our prettiest millipedes is Euryurus leachii (Order Polydesmida: Family Euryuridae), which may also be the one millipede you can set out to find when you go into the woods. I've always found it in decaying logs, but it can also be found in leaf litter sometimes. (Still though, if you for sure want to find this species, just peel back the bark on a dead log.) Its main body color is purplish-black, with orange spots down its back and on its paranota. It's another that fluoresces under UV light. This species and the previous two are all in the order Polydesmida, which includes many UV fluorescent species--always keep your black light in your insect bag! Don't be too hasty with identifying this species from photos, however: the similar-looking Auturus evides is tough to separate unless you know your stuff.

Here's another entry for the Polydesmida: the Xystodesmid millipede Apheloria virginiensis corrugata. This is a rather large millipede, with a length of about 1.5 inches, and its body is quite broad. It's another UV fluorescent species, though the fluorescence is mostly limited to the underside of its body. The yellow and black coloration is a warning to predators: like many other millipedes, this one has chemical defenses. This species can emit cyanide in response to an attack, so it's not recommended to pick it up. That's not to say it's very dangerous if you do--just wash your hands afterwards. Interestingly enough, I recently found three individuals of this species: two were dead from drowning in puddles after a rain, while the other was waltzing around in some leaf litter. They were all near the same location, and I was surprised to find three in the span of about 16 hours. Usually I have to go hunting for a while to find them. Note that this species has many look-alikes, especially in the Appalachian mountains. There's a good amount of variation even within the species, so remember that this is just one subspecies of Apheloria virginiensis. 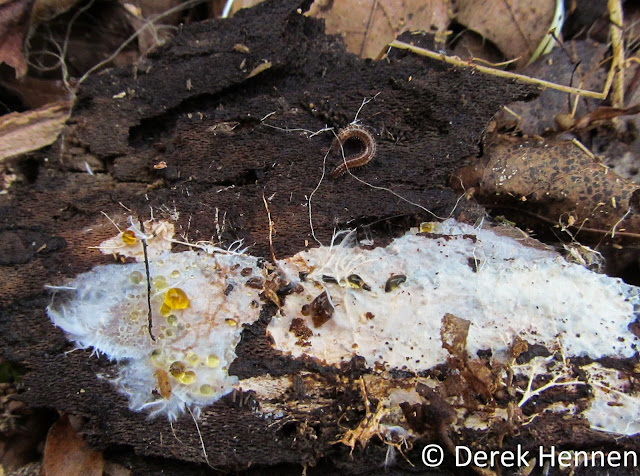 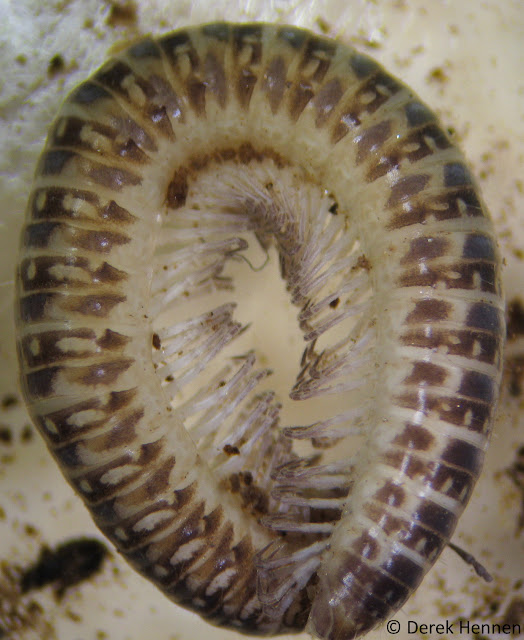 And now it's time to introduce a few less photogenic millipedes. The above species is in the genus Cleidogona (Order Chordeumatida: Family Cleidogonidae) and is small compared to the previous species in this post. The first photo doesn't show its exact features terribly well, but it shows both its size in reference to dead leaves and its colors during life. Its body is brown with white spots poking through, and it has short setae along its back. The close-up in the second photo is a dead specimen after being preserved in ethanol.

Next up are a few non-native species. 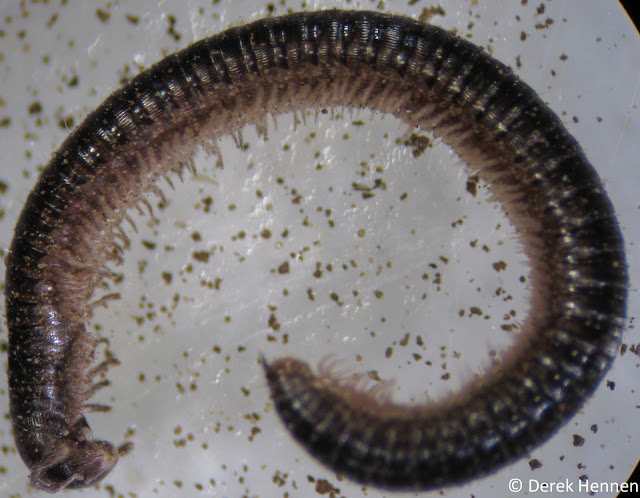 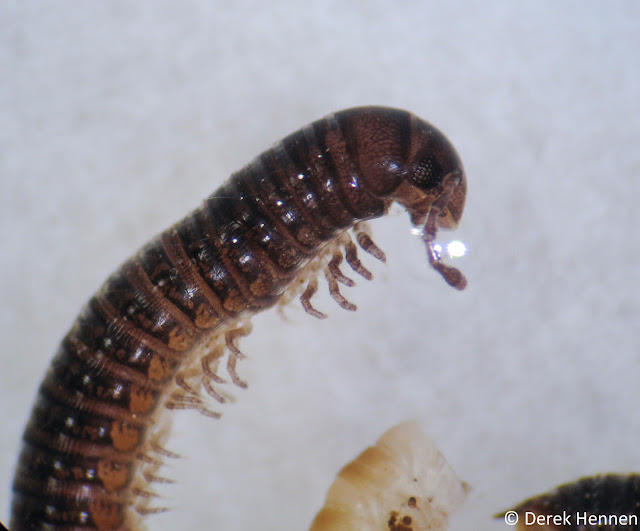 The first is Ophyiulus pilosus (Order Julida: Family Julidae), an imported species from Europe. It's usually found in yards rather than forested areas, but the specimen I've found was collected from leaf litter in a forest in late fall. It's a slender dark brown/black millipede, and its epiproct is useful for identification: that's the part at the end of the body that looks like a pointed tail (blurry in the first photo). 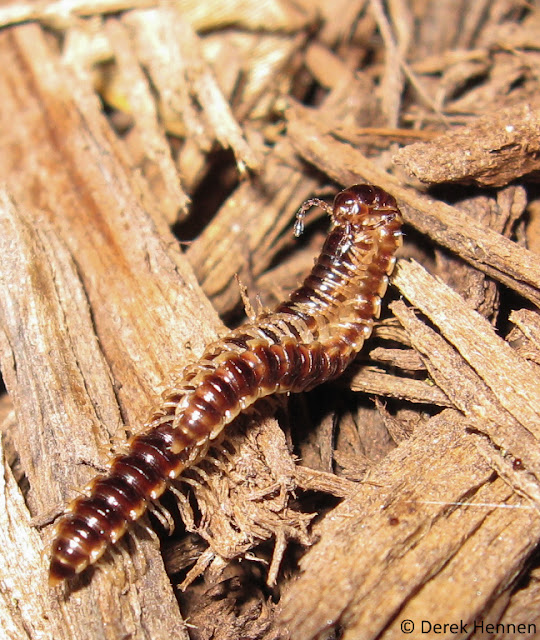 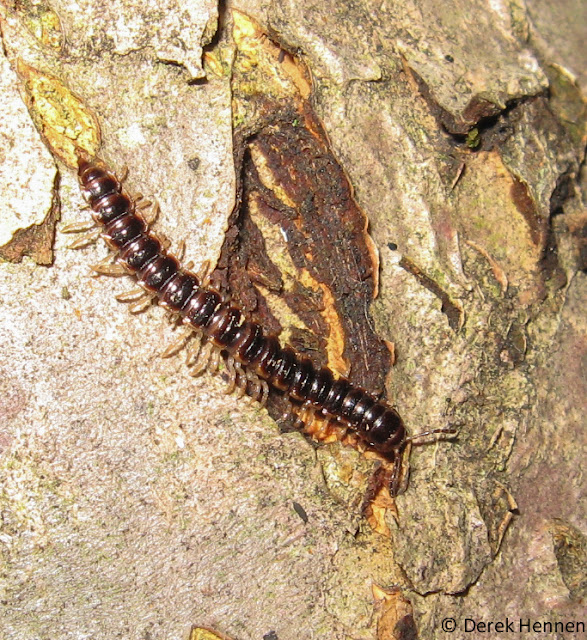 Another non-native species is the ubiquitous Greenhouse Millipede, Oxidus gracilis (Order Polydesmida: Family Paradoxosomatidae), imported from Asia. It's common throughout the US, and can be recognized by the transverse grooves on its back. It's a thin millipede about an inch long, and can usually be found mating. You've probably come across this species if you've done some gardening or turned over a rock or two in your yard. I personally am sick of seeing this millipede all over the place.
I've included some diagnostic characters for identifying these millipedes, but keep in mind that for most millipedes, you'll need to use a microscope to positively identify them. Some are distinctive enough to identify just from a photo, but even then you can get look-alikes (such as Euryurus and Auturus). However, once you become accustomed to working with millipedes and spend some time identifying your local species, it gets easier. For now, these are photos that you can trust are identified correctly--that's better than what Google will give you.

For more resources on millipedes, check out BugGuide's Millipede Hub, which is the most accessible online resource for millipedes. Rowland Shelley, who frequently helps to identify millipedes on BugGuide, has a nice collection of millipede photos on his site here. That is a resource you can DEFINITELY trust, Shelley is a world expert on millipedes. For published literature sources, you can find older articles about millipedes by searching through the Biodiversity Heritage Library, a wonderful site that has provided me with a ton of primary literature on millipedes--which is often where you need to go for keys, illustrations, and general biological information. Milli-PEET is another site with useful information, including a good key to order for millipedes. Milli-PEET is a project that was funded by the National Science Foundation, with the goal of making millipede research more accessible and succeeded in reaching that goal.

EDIT (6 November 2013): The Myriapoda Flickr group is also a great resource, with many gorgeous photos of millipedes and other Myriapods.

I hope that this post is helpful to those of you interested in learning more about millipedes, and that it inspires you to start taking photos of the millipedes in your area, wherever that may be. The millipedes are in the taxonomic class Diplopoda (that's a taxonomic position on the same level as the Insecta, which we definitely devote a lot of research to), and that includes about 10,000 species, with many more to be discovered. Millipedes are important organisms for nutrient cycling in terrestrial ecosystems, yet they're criminally under-studied. The best way to change that is by making it easy to break into millipede research, so why not start at the most basic level? People need to have the resources to identify these organisms, and photos are some of the best sources for identification (even with their limitations for millipede taxonomy). If nothing else, they can help people get a better feel for the overall "look" of different millipede taxa. So get out there and start trying to identify your local millipedes. Take some photos, put them online, and let's give some names to our many-legged friends! 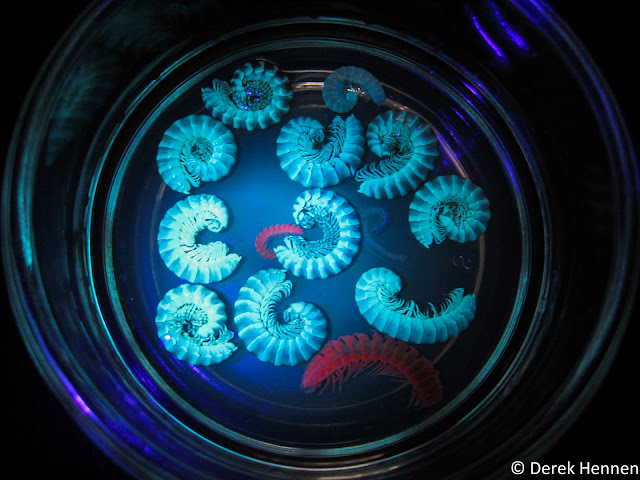 Of course I had to include a photo of millipede UV fluorescence! Not all millipedes exhibit it, but the ones that do look spectacular.
11:43:00 AM
Unknown
millipedes, Ohio, taxonomy, UV fluorescence
Email ThisBlogThis!Share to TwitterShare to Facebook