The Coroners Court ~ a system that cannot remain unreformed 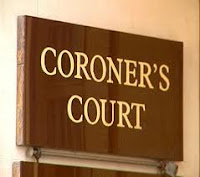 After the experience of Hillsborough, is it possible to pretend that Coroners Courts continue to be satisfactory?  The system received severe criticism in an article in The Guardian 29th April The other villain of Hillsborough saga: legal system that left families in torment - " .... over 27 years, the whole Hillsborough ordeal has sadly also illustrated why too many people who go to court do not find justice, but only the next phase of the nightmare which sent them there in the first place."


Whilst there have been some welcome reforms in recent years,  including the introduction of a Chief Coroner post, there is much more that could and should be done.  (There was prevarication over introducing the Chief Coroner post!)  The government and authorities ought not to be allowed to leave this system unreformed but they will do so unless public pressure is brought to bear.

When the Coroners and Justice Act 2009 was enacted, it contained provisions for inspection of the Coroner system (section 39);  appeals to the Chief Coroner (section 40) and legal aid (section 51).  Regrettably, those provisions were not brought into force and were repealed by the Public Bodies Act 2011 and, for legal aid, by the Legal Aid, Sentencing and Rehabilitation of Offenders Act 2012.

It is an amazing and unsatisfactory fact that the Coroners Court is the only inferior court in the legal system against which there is no general right of appeal.  A Coroner's determination can only be challenged by the cumbersome, limited and expensive process of judicial review in the High Court.  Also, there is a power in the Coroners Act 1988 section 13 for the High Court to order a new inquest - as happened belatedly in the Hillsborough case.  Under section 13 the Attorney-General must apply or, at least, give permission for the application to be made.  The Hillsborough Independent Review, together with pressure within Parliament, persuaded the Attorney-General to apply.

With regard to appeals, the Explanatory Notes to the 2009 Act said: - "A coroner’s determination as to who the deceased was, and how, when and where the deceased came by his or her death (and, where relevant, the circumstances of the death) can also be appealed, as can his or her finding of details required for registration of the death."  Hopes of an appeal system being introduced were dashed when the coalition government decided to enact the Public Bodies Act 2011.

Generally, there is no legal aid at inquests.  This is justified by the government on the basis that an inquest is inquisitorial.  It overlooks the point that public bodies are invariably well funded and have legal representation whereas families are not and do not.  Anyone with even the slightest insight into inquests will know how easy it is for legal representatives of public bodies to raise points which are difficult for families to deal with in the absence of legal aid.  Families simply lack the knowledge and expertise required.
It is, quite simply, a system with the potential for immense unfairness.  For my part, I would urge the government to institute a root and branch review of the Coroners system to ensure that it truly is fit for purpose in the 21st century.  The provision of legal aid should also be revisited.

Interestingly, Scotland does not have Coroners.  Deaths requiring judicial examination are reported to the Procurator Fiscal and dealt with by Fatal Accident Inquiries conducted by the Sheriff for the area.  Northern Ireland has a Coroners system headed by a High Court Judge.  In addition there is a senior coroner and three coroners.
In October 2015 the government issued a consultation to examine some of the reforms introduced by the Coroners and Justice Act 2009.  This consultation, whilst not unimportant, did not amount to the more detailed examination which, in my view, ought to take place.  The consultation paper is here.

3:04:00 AM
Unknown
english, Laywer
Email ThisBlogThis!Share to TwitterShare to Facebook