(CNN)Australia has a new Olympic hero -- and his name is Kyle Chalmers.
The 18-year-old stunned the field in the men's 100-meters freestyle final to claim gold and become the first Australian to win the event since Mike Wenden in 1968.

Chalmers, who had already won bronze in the 4x100-meter freestyle relay, edged out Belgium's Pieter Timmers and defending champion Nathan Adrian of the United States.
The teenager was seventh on the turn but powered through the final length to claim a shock victory.
"It's definitely still sinking in that I've actually won," Chalmers told reporters after the race. "I was a bit worried that I glided for a bit too long at the finish but very happy with that.
"It's unbelievable, I mean, I'm only 18. Nathan [Adrian] is 10 years older than me and he's the reigning Olympic champion so being next to him was pretty daunting for me but I knew I had to stick to my guns." 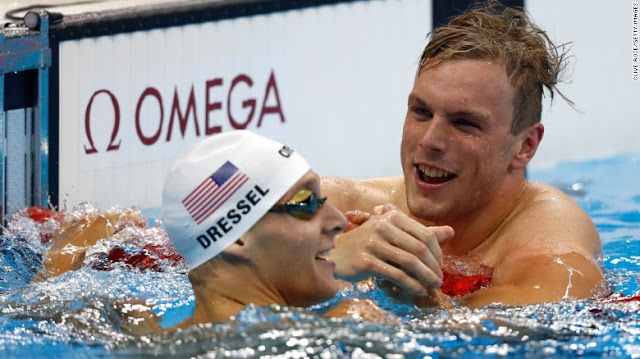 The son of former AFL footballer Brett Chalmers, he is Australia's youngest swimming gold medalist since Ian Thorpe announced himself on the world stage as a 17-year-old in Sydney.
And there was more joy for Australia in the women's 4x200m freestyle relay with the team taking silver behind a US foursome powered by Katie Ledecky.
Ledecky, who claimed her third gold of the Games, swam a stellar final leg to reel in the Australians with Canada taking bronze.
Chalmers' victory was not the only shock of the night in the pool with Kazakhstan's Dmitry Balandin claiming gold in the men's 200-meter breaststroke.
Balandin finished in a time of two minutes, 7.46 seconds, just 0.07 seconds ahead of Josh Prenot of the US and Russia's Anton Chupkov.
"It's probably the biggest honor and the best thing I could do for my country," he told reporters.
"I'm very proud of this. This is history, the first swimming medal for Kazakhstan, and I'm very glad I wrote it."
Elsewhere, Mireia Belmonte became the first Spanish women to win an Olympic swimming gold after taking the 200-meter butterfly title.
Second in London four years ago, Belmonte went one better on this occasion, finishing ahead of Australia's Madeline Groves and Japan's world champion Natsumi Hoshi.
Belmonte, who won bronze in the women's 400-meter individual medley on Saturday to add to the silver she won in the 800-meter freestyle in London four years ago, is now Spain's most successful swimmer.
Meanwhile, a day after taking his gold medal tally to 21, Michael Phelps booked his place in the final of the men's 200-meter individual medley final.
Phelps qualified as the fastest man with US teammate Ryan Lochte also making it through after finishing in second.
10:51:00 PM
Unknown
Australia, golden, history, news, Olympic
Email ThisBlogThis!Share to TwitterShare to Facebook