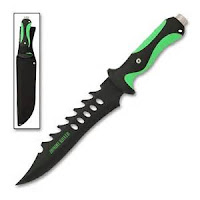 Having article with blade or point in public place:

On 9th May 2014, this blog looked at sentencing for possession of bladed or pointed articles.  The offence is governed by the Criminal Justice Act 1988 section 139.  In that post it was noted how the maximum sentencing powers for possession of such articles had been increased by Parliament but there was some concern that actual sentencing did not reflect those increases.

There has been growing concern that so-called Zombie Knives have become a weapon of choice for those with criminal intentions.  The government has secured new legislation on such articles.

Any person who manufactures, sells or hires or offers for sale or hire, exposes or has in his possession for the purpose of sale or hire, or lends or gives to any other person, a weapon to which this section applies shall be guilty of an offence and liable

(a) on summary conviction, to imprisonment for a term not exceeding 12 months or a fine not exceeding the statutory maximum, or to both;

(b) on conviction on indictment, to imprisonment for a term not exceeding 4 years, or to a fine, or to both.

The 1988 Order has now be amended so that the weapon known as a zombie knife, zombie killer knife or zombie slayer knife is included in the list of specified weapons.  The amending statutory instrument is the Criminal Justice Act 1988 (Offensive Weapons)(Amendment) Order 2016.

2.—(1) The Schedule to the Criminal Justice Act 1988 (Offensive Weapons) Order 1988 (which specifies offensive weapons for the purposes of section 141 of the Criminal Justice Act 1988) is amended as follows.
(2) In paragraph 1, after sub-paragraph (r) insert -
“(s) the weapon sometimes known as a “zombie knife”, “zombie killer knife” or “zombie slayer knife”, being a blade with -
(i) a cutting edge;
(ii) a serrated edge; and
(iii) images or words (whether on the blade or handle) that suggest that it is to be used for the purpose of violence.”

See the Explanatory Notes to the amending legislation.  The amendment is in force from 18th August 2016.

I did a Google search against "Zombie knife" and it revealed a vast array of potentially highly dangerous articles.  Quite which of them would actually fall within the definition in the new legislation is debatable and, at this time, I am not going to speculate.