WHEN TO VISIT ICELAND & WHEN NOT TO

A MONTH BY MONTH GUIDE

While winter can be a spectacular time to visit, temperatures can plummet as low as -30°C, particularly in northern Iceland, with December to February the iciest months. Wind chill can make apparent temperatures feel even lower. Don't avoid Iceland in winter – but pack proper thermal gear!

The Northern Lights appear from September until April – but February to March, and September to October – particularly around the equinoxes – are the best months to see them.

Late November through December and January are seriously lacking in daylight – not an issue for aurora seekers, but frustrating for photographers or outdoor adventurers.

June and July are the months of the midnight sun, which may sound wonderful but expect a few nights of troubled sleep as your body adjusts to the constant Arctic light. And pack an eye mask! By August, the nights begin to darken.

If you want to drive bear in mind that many minor roads – especially in the mountains – are closed from late September to June (and sometime early July) due to snow and ice. Even when open you need a 4WD for most of them.

Orcas visit the Iceland coast in February and March; specialist companies run boat tours and wildlife photography excursions to make the most of this magical spectacle.

When is the best time to visit Iceland?

There’s a long list of questions that I get asked more frequently than others and somewhere on the top ten of that list is the question: When is the best time to visit Iceland. For many different reasons this is a difficult question to answer. For example, if you can only get time off in February then February must be the best month to visit, right? 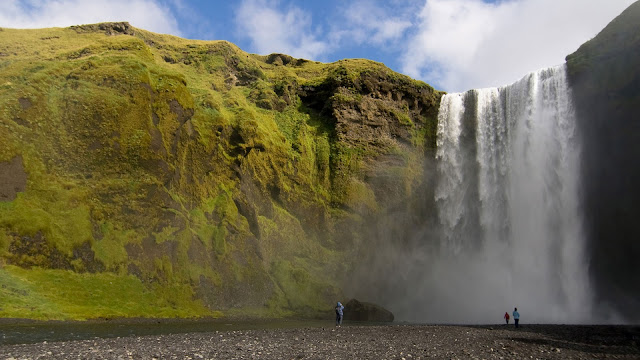 So instead of trying to tell you what is the best time to visit Iceland I thought I’d rather tell you a little bit about each season, what I like about it and what obstacles (if any) you might face during it. Now how does that sound?

I love Iceland in the autumn. I love the golden light, the colorful trees, the crazy storms (only if I can stay inside though) and the coziness that comes with the darkness. From a visitor’s standpoint the autumn should also be a good time to visit because the prices are lower and there are fewer travelers around so most places are not as crowded as during the summer months. On the downside the weather is pretty unpredictable, as it any time of the year actually, and you could end up having some crazy storm alter your travel plans. If you take care and make sure you follow advice about the weather and travel conditions there’s no reason why your autumn trip to Iceland can’t be awesome.
Þingvellir in its autumns colors is one of the beautiful things ever.

I’m obsessed with light in all shapes and forms. Pink, yellow and orange sunsets and sunrises get me all worked up and Ioohh and ahh like most of you probably oohh and ahh over the northern lights. I also love the snow, mostly when it’s brand new and it hasn’t frozen, rained and frozen again and I haven’t fallen on my butt a million times. I also adore the Christmas time:  the Christmas lights, the mulled wine and Christmas beers.
I’m not sure I’d plan to travel all over the country in winter, despite the fact you usually can, since you might get stranded somewhere due to the weather. That’s OK when you have plenty of time but if you’re on a short winter break  your boss might not appreciate you loosing your flight because it was too windy in Ísafjörður.  Visitors that don’t have a sunset/sunrise fetish like me can enjoy the amazing northern lights and the chilled atmosphere of the city.

Ahhh… spring. Who doesn’t love spring? The smell of something new and exciting is in the air and the days are getting longer. The spring in Iceland is more like 5 minutes between winter and summer than a whole season but while it lasts it’s absolutely lovely. You’re going to love it because you get to benefit most of the things that make the Icelandic summer great minus the crowds and high-season prices. That means long bright days (although not as long as in June and July), decent weather (it’s still Iceland though) and traveling with more ease.

Visiting Iceland in summer has its pros and cons. The things to look forward to are the long summer days, midnight sun, better weather and everything being more green and lush. The highland roads usually open mid summer too which will give you access to the raw and somewhat untouched part of Iceland. The downsides are more crowds, higher prices and difficulties finding reasonably priced accommodation in certain areas (or any accommodation at all for that matter).
So if you are going with the flow kind of traveler, unwilling to book your summer holiday in January, and your idea of Iceland is desolated vistas barren of human kind then you’re probably in for a bit of a disappointment.  Unless you come in winter or you go to areas like Langanes. If your fear of the cold persuades you to adjust your expectations and you manage to look at sharing Gullfoss with 40 buses as a chance to meet new friends, then the Icelandic summer is definitely worth checking out.
travel, wold travel, tour, Touristm, Iceland, visit
10:49:00 PM
Unknown
Iceland, tour, Touristm, travel, visit, wold travel
Email ThisBlogThis!Share to TwitterShare to Facebook