According to the latest safety test results released by Euro NCAP, the Skoda Superb achieved 5 Stars, thanks to robust crash protection and its Autonomous Emergency Braking systems. The Superb is also equipped with crash avoidance technologies awarded under the Euro NCAP Advanced Rewards scheme such as Multi Collision Brake and Crew Protect Assist.

Among other cars tested, the Hyundai i20 supermini acheived 4 stars which is quite good for its segment, but misses out on the 5 stars due to a lack of an AEB system.

However, the Fiat Panda Cross recveived a modest 3 star rating. The supermini, based on the third-generation Panda 4x4 launched back in 2012, lacked assist technologies and also did not fare well in the latest full width crash test designed to evaluate the protection offered to smaller occupants in the driver and rear passenger seat.

Given below is the list of car safety ratings for 2015 so far, from the Euro NCAP website. 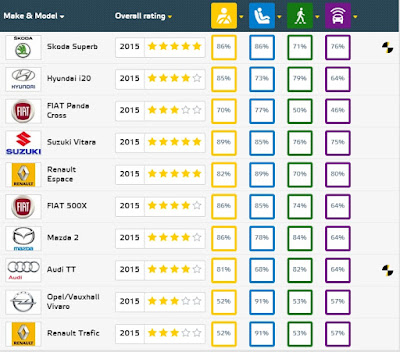