Saturday was the 2014 meeting of the Kansas Entomological Society in Emporia, Kansas, and I joined the University of Arkansas delegation on the 4 hour trip to attend. The week leading up to the meeting was stressful, with preparing my talk and not feeling well towards the end of the week, but everything worked out fine.

I will say that I need to start preparing my talks sooner. I'm apt to procrastinate, which gives me a tendency to put off writing my talks until a few days before I give it. This is not optimal. It results in feeling unprepared (because I am) and makes for an awkward talk. I've started to budget more time into my schedule dedicated to working on my talks, and it's helpful to block out a half hour to an hour dedicated solely to working on presentations in the weeks leading up to them. That's not to say I still don't fail to take advantage of that time, and in those cases, I've gotten past feeling sorry for myself and being paralyzed by the fear of a blank page.

A benefit of being part of the Entomology department is that the department head schedules times for the grad students to give their practice talks to a small group of peers for feedback. It's not a good idea to disappoint the chair, so we always have our talks ready to go a few days before leaving for any conference. They're definitely not perfect, and the suggestions we receive help a lot during the pre-conference editing process.

Thanks to the suggestions I received, I was able to make my talk much better than what I started with, and it was relatively fun to edit. My talk covered my previous work with Ohio's millipedes and what my plans are for the summer with my grant from the Ohio Biological Survey. I made a chart showing my current millipede species count for Ohio, which I was particularly proud of. You can see it below. 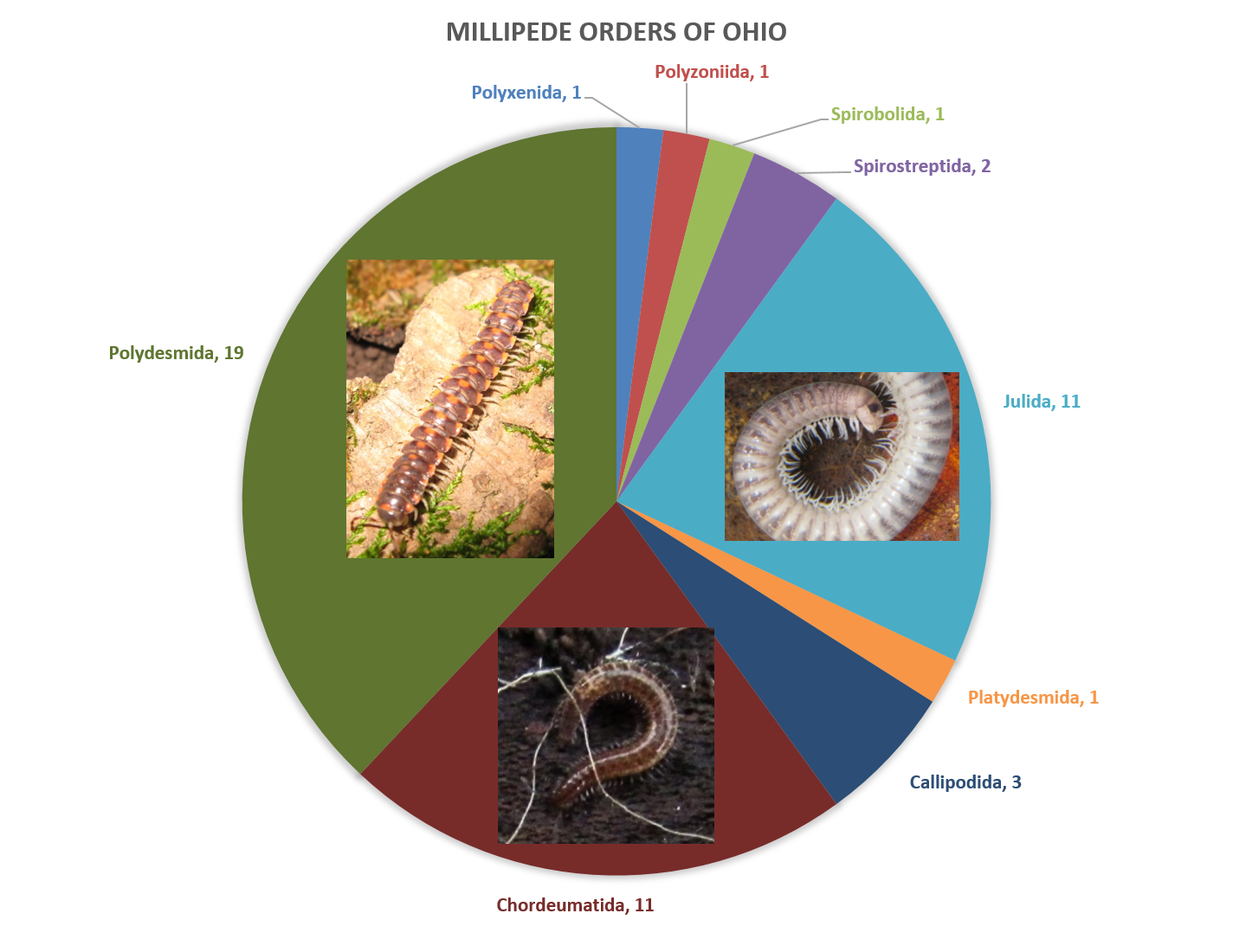 This chart will surely change as I get better data on how many species are in Ohio, but this is what I have so far. The top three orders: Polydesmida, Chordeumatida, and Julida make up 82% of the state's millipede diversity. It's not terribly surprising, but I had never done the math on it before, and it's useful to lay out the data so that I know what I'm dealing with.
On the day of the conference, I was more nervous than I usually am for public speaking, which I wasn't taking as a good sign. Thankfully, when I got up to give my presentation, I was feeling back to normal. I started my talk by taking a photo of the audience and mentioning a publication on millipedes available near the registration desk. It loosened up the atmosphere a bit.
My talk went very well, and I had a wave of relief overtake me once I sat down. It's always nice to get a talk out of the way early on during a conference and then be able to just enjoy it. I was very impressed by the other student talks I heard during the day, and I was able to meet Crystal Maier, a fellow Twitter user! Her talk was immediately following mine and it was great, aside from her negative opinions on Ohio fieldwork. Though when she has the option of going to the tropics to collect beetles or stay in US....I guess I can see her point.
Crystal ended up winning first place in the competition for her talk, so congratulations to her! It was well-deserved. The judges couldn't make up their minds, so 1st place was shared by Oliver Keller, who presented an excellent talk about his work with California's bear scarab beetles. I was happy to take 3rd place, showing that my talk had definitely progressed since my (disastrous) practice talk a few days prior.
The posters at the meeting were likewise of high quality. I read a particularly nice poster by Emmy Dudek, from Wichita State University, about a pilot survey of grasshoppers in the state she had completed. It had beautiful photos and I'm hoping to see it eventually adapted into a field guide!
State entomology conferences are always great to present at and have a cordial feel to them. They're not nearly as hectic as national or regional conferences, and it's nice to be able to have conversations with fellow scientists instead of constantly running around. It's also a low pressure environment, another positive. The Kansas meeting was probably the most fun I've had at a conference recently, and I'll definitely be attending next year.
Additionally, the next meeting will be at the University of Arkansas in Fayetteville next April, which makes for a short commute time for me. Convenient!
11:28:00 AM
Unknown
Arkansas, Kansas, millipedes, Ohio
Email ThisBlogThis!Share to TwitterShare to Facebook