While using StumbleUpon yesterday, I came across a gardening website that was discussing Red clover (Trifolium pratense), a plant native to Europe that has become naturalized in the United States. While reading a little bit about it, I realized that I had never actually associated the small pink flowers with the actual clover itself.

Now, this realization was embarrassing, because I should have made the obvious connection and paid attention to my surroundings. But it was also eye opening that I have been surrounded by clover and these pink flowers all my life, but had never before thought about any connection between the two. Clover has been ubiquitous in my yard, and essentially any other place I've gone in my life, so it's not like this was just a small anomaly.

Red clover itself is pretty interesting. It's part of the legume family, Fabaceae, which includes soybeans, peas, and peanuts. One of the most interesting characteristics of this family is their nitrogen-fixing roots. Many species have root nodules on their roots, which host bacteria that can fix nitrogen from the air, thereby enriching the soil. It's a symbiotic relationship that confers advantages to the bacteria and the plant, and makes the soil more fertile at the same time. The plant itself is eaten by grazers.

Bumblebees are pollinators of the flowers, and I've seen butterflies drinking the nectar from the flowers as well. 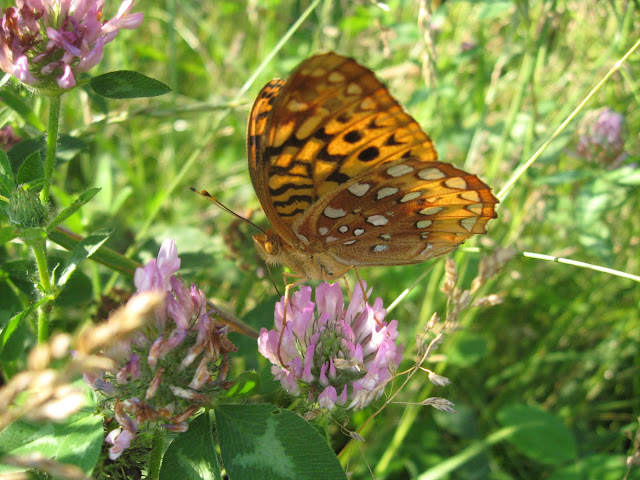 So, moral of the story: pay attention to the plants and animals around you. Especially the ones you've had around you for your entire life.