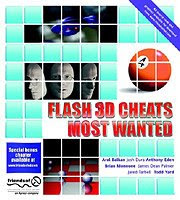 Why is this book called "3D Cheats"? Unlike committed 3D applications (like Maya, 3D Studio Max, Swift 3D), Flash MX doesn’t have an internal 3D engine, and therefore if a designer wants include realistic 3D effects in their Flash designs they must either import from one of these other 3D applications (can be complex, expensive, and time-consuming), or rely on "pseudo-3D" effects – 2D graphics rendered to mimic realistic 3D imagery.

This book teaches users how to employ 3D principles without having to learn the official names for everything. Digital 3D is a tricky area – and until the day someone makes 3D TV commercially viable, it’s going to remain a tricky area. What is 3D? Can you genuinely render 3D on a flat screen? Do you have to spend a year’s wages to get a dedicated piece of 3D software? Do you have to conjure up a bunch of complex math techniques to make the grade? Is anyone going to answer these interminable questions? Well, listen: we’re not out to work ourselves into the ground here. We want 3D and we want it fast, and we want to use Flash to get it.

In a series of clear and concise demonstrations, this book shows you exactly what can be achieved in Web 3D. Some of the most cunning designers around have put their heads together to present these: the most wanted 3D cheats in Flash.

2:51:00 AM
Unknown
3D Animation
Email ThisBlogThis!Share to TwitterShare to Facebook